Debiganj Upazila (panchagarh district) area 309.04 sq km, located in between 26°00' and 26°19' north latitudes and in between 88°39' and 88°49' east longitudes. It is bounded by boda and panchagarh sadar upazilas on the north, birganj, khansama and nilphamari sadar upazilas on the south, domar upazila and west bengal state of India on the east, thakurgaon sadar and Boda upazilas on the west. There are a number of Indian enclaves in the upazila, most noted of which are Behula Danga, Balapara, Court Bhajni and Dahala Khagrabari.

Administration Debiganj Thana was formed in 1928 and it was turned into an upazila on 28 March 1983.' 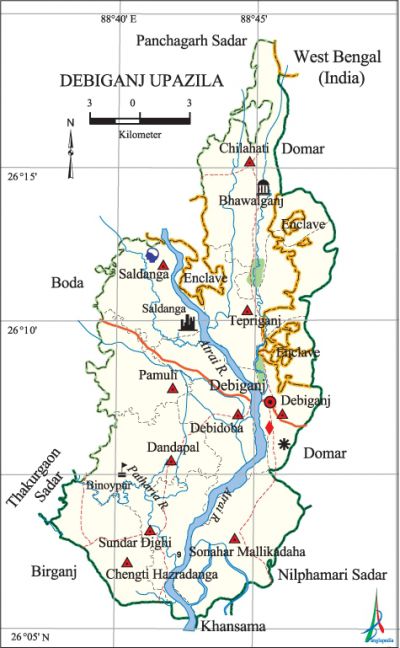 History of the War of Liberation During the war of liberation in 1971 a number of guerrilla operation were held in this upazila. In the month of November, the Pak army brutally killed 18 innocent persons at Diagari. Debiganj was liberated on 8 December 1971.

Natural Disasters Many people died of starvation during the famine of 1943. The flood of 1968 caused heavy damages to settlements, livestock and properties of the upazila.