Deforestation removal of trees from existing forest areas. The primary cause of deforestation in Bangladesh has been population increase, in addition to such other factors as demand for forest products and fuel wood, and conversion of forest land to such other uses as agricultural, industrial, urbanization and development of infrastructures for transportation, energy production and so on. 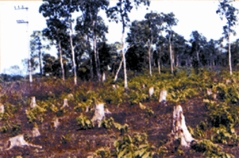 The other aspect is that forestlands are being encroached upon illegally. Up to 1989, about 76,596 ha of forestlands have been encroached upon in different forest areas. According to one estimate, forest cover in Bangladesh has declined from about 15 percent of the total area to 5 percent.

Out of a total area of 2 million ha of forestland, less than half of this area is actually covered with trees, the estimated rate of deforestation being 8,000 ha per year; 40 percent of forestlands have reportedly been lost from 1960 to 1990. Deforestation rate was 0.9 percent in 1970, but rose to 2.7 percent in 1984-90. Some sources quote satellite surveys and note that forests are declining at a rate of nearly 70,000 ha per year and Bangladesh has less than 0.02 ha of forest land per person, one of the lowest forest-man ratios in the world. If the current trend continues, forests are likely to disappear altogether in the next 35-40 years or earlier. The implication of continued deforestation is that valuable species may disappear forever. In addition to habitat loss, the environmental effects of deforestation include soil degradation, flooding, erosion and above all the danger of climate change. [M Aminul Islam]