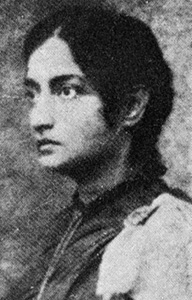 Devi, Jnanadanandini (1850-1941) pioneer to attack traditional ways of Babgali women and reformer of their dress style. She was born in a remote village in Jessore and married off at the age of eight to satyendranath tagore, a college student, who later became the first native member of the Indian Civil Service in 1864. At the time of her marriage, Jnanada was illiterate and too young to understand the significance of marriage; on the contrary, her husband believed in romance and personal choice.

After marriage, he, therefore, started to educate and westernise his child-wife; and when he went to England to compete for ICS, he even asked his father, devendranath tagore, to send her to London so that he could educate and modernise her suitably and turn her into his able companion.  He also wrote that until she was educated and old enough to take him as her husband, he would not enter into a husband-wife relationship with her. His father considered his request to be grotesque and did not naturally send his daughter-in-law to England.

However, when Satyendranath returned to Kolkata as an ICS in 1864, he took her to the place of his work in Ahmedabad in western India, and thus violated the social norm of keeping one's wife at the parental home. As Bengali women's dress at that time consisted of just a sari and, sometimes, a shawl, and thus inadequate for going outside the home, Satyendranath devised a dress for her and had it made by a French tailor in Kolkata. On her way to Ahmedabad, they stayed as houseguests at a Parsi house in Bombay for three months. It was there that she saw women in the house wearing saris along with bodices, petticoats, blouses and shoes. She adapted this style with modifications not only for herself but also for all Bengali. In order to make this style popular, she later wrote an article in the women's monthly, bamabodhini patrika and advertised that she would give a set of this dress free to anyone who would like to have it. She thus offered Bengali women a dress which was both polite and fashionable.

When she returned to Kolkata in 1866, she travelled from the ship to Satyendranath's parental home in Jorasanko by a carriage. The family people were outraged by her dress. The following year, she attended with the same dress a dinner party given by the Viceroy, and thus embarrassing her in-laws and friends. In 1877, she visited Europe with her two minor children and stayed there for two and a half years, while her husband lived in India. Such a separation was incredible for the contemporary society, but she never yielded to tradition. Years later, she even took part in theatrical performances. She was, indeed, a bold changer who broke many taboos and social restrictions.

She was also an example of how an illiterate girl could educate herself with the help of her husband and become competent to live in the society as an equal member. In addition to Bangla and English, she learnt French, Gujarati and Marathi; and turned herself into an accomplished woman mastering English manners and etiquette. A time came soon, when other women of the upper class also followed her style. [Ghulam Murshid]