Dhaka College one of the oldest educational institutions of Bangladesh starting as Dhaka Government School on 15 July 1835. It was the first English School founded in Bengal. The school was set up in an old 2-storyed commercial building of the east india company located near Sadarghat on rental basis. Local people also came forward with all possible help and co-operation to supplement this effort of the government. The office head of Kolkata based board of revenue Mr Ramlochon Ghosh, an inhabitant of village Bairagidi near Dhaka contributed one thousand rupees to the school fund. This donation inspired others to come forward with financial help. As a result the volume of endowment rose to five thousand rupees within a very short time. A Local Public Instruction Committee was constituted to carry out administrative and other development activities of the school. 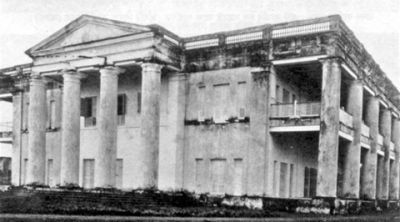 The Baptist missionaries of serampore took initiative for the first time to introduce English education system in Dhaka. They sent an Irish Reverend Owen Leonard, in 1815 to open a branch of the Calcutta Benevolent Institution to impart education to the children of the Europeans. On April 1816, Leonard opened the first English school of Dhaka with 39 students mainly Greek and Armenians accommodating then in the chhota katra building chawkbazar. The students were taught English, Grammar, Mathematics, Bible, Hymns and Religious education through question-answer session. The main reason behind the foundation of this school was to motivate the local people in embracing Christianity. Leonard founded seven Bangla Schools in 1817 to draw the attention of the Muslim students and opened the door of his English School for all non-Christian students. But with the death of Leonard the activities of English School was stopped.

The General Committee of Public Instruction, the then government agency responsible for the country's education system, in a report submitted on 20 April 1835 to lord bentinck (1774-1839) recommended to establish schools in major cities under the Bengal Presidency to teach English literature and science. They also recommended to allocate money from the government fund for establishing such schools wherever possible and to start the programme from Dhaka and Patna. The committee also wanted to know the possibility of launching a local school in Dhaka with requisite fund from the resources. In reply the then Civil Surgeon of Dhaka Dr James Taylor informed the committee that Dhaka was a proper place for such a school and the people of Dhaka would welcome if the government would decide to set up the school here. Even they would like to contribute endowment for it, if needed. After receiving this encouraging news the committee put forward a proposal to the Government of India to establish a government school in Dhaka and allocated an annual grant of six thousand rupees for the proposed school. The Government of India accepted the proposal on 24 June 1835. Following the move, the general committee sent J Ridge and Parbati Charan Sarker, two teachers from Kolkata, to Dhaka to expedite the process of establishment of the school. They made it possible to set up the Dhaka Government School on 15 July in a hired house of the East India Company. A local committee of public instruction was formed to conduct the administrative and academic affairs of the school.

The journey of Dhaka Government School created an unprecedented impact on the socio-economic arena of Dhaka city. Learners of this region were introduced to the western modern art, science and philosophy of the West for the first time. Inspired by the new education system they made effort to carry forward the society and the nation. The number of students has been increasing with the raise of demand for English education.

During the 1838-39 session, the Dhaka Government School had 340 students in eight classes and eleven teachers including seven Englishmen. It was turned into a college in 1841 with the name Dhaka Central College. The Bishop of Kolkata Reverend Daniel laid the foundation of the College building at Sadarghat and its construction was completed in 1844. The first batch of the students consisted of the Muslims, Hindus, Armenians and Portuguese. There were many Armenian and Portuguese traders in Dhaka at that time. It was renamed as Dhaka College in 1846. In 1873, the College was shifted to a spacious building near Victoria Park to accommodate the increased number of students. Later in 1908, it was shifted to the present Curzon Hall.

With the beginning of the World War I in 1914, its adverse impact on Dhaka College resulted in declination of academic activities and other development works. The armed forces were about to take possession of the college building. In 1920, another college, named Dhaka Intermediate College was founded comprising the intermediate classes of Dhaka College. The new college was removed to the then Engineering School campus. Only the remaining BA, BSc, MA and MSc classes were accommodated in Curzon Hall. With the establishment of the university of dhaka in 1921, Dhaka College was shifted to the residence of Lieutenant Governor (Present High court building) and the Engineering School building was made the student hostel of the college. The Engineering School building was removed to the Secretariat Building. Moreover a section of Dhaka College was merged with the newly created university. Its teachers, staffs, books and library also brought under the university. During the World War II, Dhaka College had to vacate its possession for accommodating the injured soldiers, and then it was removed to Laxmibazar. In 1955, the college was shifted to the present location. The college campus now covers an area of 18 acres of land.

The College was affiliated with the University of Calcutta after 1854, when Graduation and Post-graduation courses were introduced here. In 1921, it was affiliated with the newly established University of Dhaka. The College introduced Graduation and Post-graduation courses again in 1974. After the establishment of the national university the college came under its jurisdiction in 1992. At present Dhaka College has about 18 thousand students, 240 teachers. Beside higher secondary courses, it offers graduation and post-graduation programmes in 19 disciplines under the faculties of Humanities, Social Science, Business Education and Science. [Sharif uddin Ahmed]