Dhakeshwari Temple the most prominent temple of Dhaka, is situated within a not too high boundary wall on the northern side of the Dhakeshwari Road, less than half a mile to the southwest of the Salimullah Hall of Dhaka University. There is a monumental gateway at its entrance, known as the nahabatkhana gateway.

Popular legend connects the name of one king, Ballalsena, as its builder, but it is not certain that he is identical with the 12th century Sena king of that name. The style of architecture of the temple cannot be assigned to that period. Furthermore, sand and lime, the mortar used in the building, came to be used in Bengal after Muslim conquest. Moreover, Abul Fazl, in his ain-i-akbari, has not mentioned anything about this temple, though he has given vivid description of each and every notable object in his chapter on the survey of ten subahs. Had this temple existed in his time, it was expected that it would find mention in his survey. On the other hand the three-domed roof and three arched entrances and the plastered walls of the temple strongly suggest that it was built in the Mughal style. Bhattasali also did not consider the sculpture of the deity to be very old. 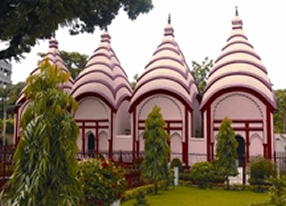 On the other hand the architectural and structural features of the temple indicate its builder to be someone who had very little influence on the culture of Bengal. Many of the features, such as the existence of a large tank, banian tree, garden, matha, resting-place and axhrama for sannyasis, and the practice of allowing one and all inside the temple suggest similarity to Arakanese religion and religious practices. The existence of twin deities - the ten-armed female deity known as Dhakeshwari and the four armed male deity known as Vasudeva - suggests the affinity with Tantric Buddhism of the Maghs.

The female deity has got the epithet dhakeshwari as the patron deity of the city of Dhaka (dhaka + ishvari). Thus it is assumed that the deity belonged to the Maghs and the architectural features indicate its affinity to Arakanese structures. From all these it has been suggested that the builder of this temple was one Mangat Ray, who was also known as Ballalasena, younger brother of Arakanese king Shrisudharma, son of famous Arakanese king Raja Malhana alias Husen Shah. Mangat was obliged to take shelter in Dhaka having been driven away from Arakan.

However, it must be said that there is another explanation of the name. The deity was found hidden underneath the earth and hence the name. Legends ascribe the construction of the temple to Ballalasena, the Sena king, who found the deity and constructed a temple for it.

Thus it appears that the origin of the Dhakeshwari temple is shrouded in mystery. In the beginning of the 20th century Bradley Birt wrote that the temple is more than 200 years old and a Hindu agent of the east india company built it.

The Dhakeshwari temple is a complex of several temples and ancillary buildings. The complex has an inner-quarter on the east and an outer-quarter on the west. In the inner quarter stand the main temple, the nat mandir in front of it and other structures. In the outer quarter stand a few temples, one panthaxhala and a few rooms. On the western side there is a large tank with north - south elongation with walking-path all around. A very old banyan tree stands on the southeastern corner of the tank. There are a few tombs of sadhus to the east of the rest rooms and the tank.

There are four small temples of same size and shape on the northeastern corner of the tank, which stand one after another from east to west. Each of them is built on a high plinth and approached by a flight of steps. The stairs of the eastern-most temple is made of marble. These temples with shikhara are square in plan and their roof was constructed in six gradually receding tiers with lotus and kalasa finials on top. Each of these is entered through narrow arched openings, one each on all sides except the north. There exists a projected band on linear decoration, and in between this band and the domical roof the walls are decorated with panels of semi-circular cusped arches. Each of the temples has a shiva linga inside.

The main temple is situated in the inner quarter on the east. A wall separates this quarter from the outer wall and entered through a monumental gateway, a bell adorns its top. In the ground of the inner quarter stands a marble altar for puja-offerings. The nat-mandir stands in front (or to the south) of the main temple and in its centre there is a place for bali. To its south stands the yajna mandir with a yajna-kunda.

To the north of the nat-mandir stands the main temple facing south. It is a three-roomed structure with a veranda in front having beautiful wooden doors with curving of different motifs, both sculptural and floral. Three slightly pointed multi-cusped arches enter the veranda in front of the central room, which is rectangular, on three heavy pillars. The veranda in this section has marble floor and is covered over by a vaulted roof. The veranda in front of the eastern room, square in shape, is entered through semi-circular arched entrances, while the western veranda, also square, is entered by a simple doorway. The central room has a vaulted roof, while the side rooms are covered with flat roof on wooden beams. The spandrel of the arch in the central room is decorated with six lions. Merlon decorations are placed above the curved cornice.

The three rooms of the main temple are crowned with domical-sikhara roof; the sikhara over the central room is much higher and bigger than the flanking ones. The roof over each room is constructed in four gradually receding tiers, the lowest tier has a somewhat chau-chala look, and the upper three appear to be in the shape of north-Indian canopies. The two side-rooms of the central temple contain black basalt shiva-linga, one in each and the male four-armed (Vasudeva) and the female ten-armed (Dhakeshwari or Durga) deities adorn the central room. It is said that earlier the female deity was made of pure gold.

The temple complex has undergone repairs, renovation and rebuilding in its long years of existence and its present condition does not clearly show any of its original architectural characteristics. It may be mentioned that nearby there was an imambara or husaini dalan and in a map of 1864 it was marked as the old Huseni Dalan. [M Muktadir Arif Mozammel]