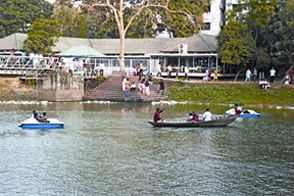 Dhanmondi Lake a prominent depression within Dhaka metropolitan area. It is situated in the middle of dhaka City (about 23°43'N latitude and 90°26'E longitude). It lies within the vicinity of Dhanmondi residential area. Originally Dhanmondi Lake was an abandoned channel of the 'Karwan Bazar Nadi' ('Karwan Bazar' is commonly spelled and pronounced as 'Kawran Bazar'), previously known as the 'Carevan River', whose alignment was possibly along Begunbari Khal-Green Road-Kalabagan-Dhanmondi Lake to the turag river. Part of this lake still functions as a storm water drain and falls into the Begunbari Khal. Expansion of urbanisation in this area during Pakistan period has changed the natural water system in this place. Dhanmondi residential area was developed in 1956 with 240.74 ha of land including the lake.

The lake is about 16% of the total area of Dhanmondi and has been playing a vital role in maintaining the only drainage system of Dhanmondi and adjacent areas. It also shows some trellis pattern together with the dendritic pattern of drainage system. The lake offers attractive panoramic views to many thousands of people who live in the vicinity.

Beginning from Jigatola (Dhanmondi Road # 2) the lake extends up to Road # 27 (new l6A), and bounded by the Mohammadpur-Lalmatia area in the north, Satmasjid Road in the west, BDR (bangladesh rifles) Gate (Dhanmondi Road # 2) in the south and in the east by Kalabagan residential area. It is 3 km in length, 35-100m in width, with a maximum depth of 4.77m and the total area of the water body is 37.37 ha. There is one box culvert in the lake near Sukrabad area, which is the only outlet of the lake. Excess floodwater due to heavy rainfall passes through this outlet. So water level in the lake remains almost the same in all seasons.

The lake is under the management of several authorities looking after its various aspects. The Ministry of Works has its ownership; the Fisheries Department looks after fishery development; the dhaka city corporation, being the principal civic body, exercises some responsibility in its improvement. The Department of Environment (DOE) looks after the aspects of proper environment and protection of aquatic resources of the lake. In and around Dhanmondi Lake some renovation works were carried out from 1998 to 2001 with a view to making the lake a pollution free recreation zone. [Sifatul Quader Chowdhury]