Dighapatia Rajbari was originally the residence of the Maharajas of Dighapatia built by Dayaram Roy (1680-1760), the dighapatia raj in 18th century. At present, it is used as the Uttara Ganabhavan or the Government House in the northern region. A short feeder road branching off the Natore-Bogra highway, about 2.40 km from the Natore town, provides access to the palace area. 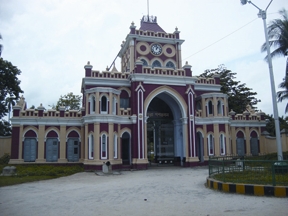 Dayaram Roy constructed the main fabric of the palace along with a few accessory wings around but Pramada Nath Roy rebuilt the whole palace complex from the debris after the devastating earthquake of 1897 had wrecked it. The extensive palace area occupies about 43 acres of land, enclosed within a moat and a high perimeter wall.

It is approached from the east through an imposing four-storied pyramidal gateway gradually receding upward and terminating in a clock tower. It is further variegated with a series of arched openings on three storeys and two circlets flanking the clock on the top storey.

The main east facing single storeyed palace block presents a 30.48 metre long facade, laid out in the shape of an 'E' with a prominently projecting porch in the centre and two slightly projecting wings on either ends. The whole facade is relived with floral decoration in plasterwork. A series of pointed trefoil arched openings provide access to the building across a running balcony in front. The parapet on the roof is decorated with merlons. The hemispherical dome with a sharp finial atop covers the central foyer. On either side of the broad entrance staircase there are two elegant life-size cast-iron neo-classical Greek female statues each holding a lamp above its head.

This palace block accommodates nine sleeping chambers, a reception hall, one dining hall and a conference hall. The roof of the reception hall is about 7.62 metre from the floor and much higher than the flanking apartments. Its ceiling is tastefully decorated with painted floral motif in wood set in bays. In spite of the plundering of its costly belongings there are still some beautiful pieces of relics such as the neo-classical bronze Greek statues, flower vases, chandeliers, carved wooden bedstead and furniture.

The southern wing of the block is similarly planned in the form of an ‘E’. There is an attractive garden in front with a fountain and a few life-size marble female sculptures located at the four corner porticoes. A broad verandah in front leads to a large foyer and beyond, to a series of apartments. The roof of the verandah is carried on semi-Corinthian columns alternated by trefoil arches. A serpentine rear verandah on the western end of the block overlooks a part of the moat.

The 'Kumar Palace' located on the southeast, close to the main palace block is an elegant two-storeyed building accommodating four main bedrooms and a dressing room on the upper floor and a series of apartments on the ground floor. The small 'treasury building' stands behind the Kumar Palace. The single-storeyed manager's office is located close to the gateway on the north. Other accessory buildings, such as the single storeyed 'Rani Mahal' to the south of the main block, originally occupied the vast fortified area of the palace. The guesthouse, stable, the attendants' quarters etc. have all disappeared with the passage of time and at the wake of the great earthquake of 1897. [Nazimuddin Ahmed]