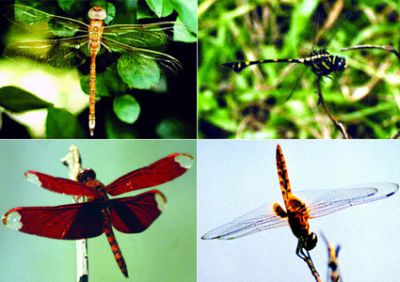 Dragonfly any of the diurnal, beautiful, flying insects of the suborder Anisoptera, order Odonata. The dragonfly has four large, many-veined, membranous wings which when at rest are held horizontally and at right angles to the longitudinal axis of the body. The body is long, slender, often with red, green, blue, or black markings. It has chewing mouthparts with strong toothed mandibles; its antennae is short and bristle-like. The head is large and capable of great rotation. Large compound eyes cover most of the head. Dragonflies can see motionless objects almost 2 m away and moving objects 2 or 3 times that distance. The legs are provided with spines and can be used to perch, but are not adapted for walking. As the dragonfly flies through the air it holds its legs together to form a basket in which to capture insects.

Dragonflies exhibit unusual mating behaviour. Male and female often fly together and sometimes mate while in flight. The female usually deposits eggs in water or places them inside the stem of an aquatic plant. A single female may lay up to 800 eggs. Eggs hatch within one to three weeks. The dragonfly undergoes incomplete metamorphosis. Larva known as naiad lives in water for one to five years. It eats small aquatic animals but chiefly Mayfly and mosquito larvae. Some large dragonfly larvae may even feed on young fish. While developing into an adult the larva moults about 12 times.

The important families of dragonflies that occur in Bangladesh are Aeshnidae, Cordulegastridae, Gomphidae and Libellulidae. Nearly 30 species have been recorded. Most of the common species belong to the families Libellulidae and Aeshnidae. [Monawar Ahmad]