Dubalhati Zamindari a zamindar family of village Dubalhati under sadar thana of Naogaon district representing the earliest of the zamindar families of greater Rajshahi district. One Jagat Ram Roy was the founder of this zamindari. He was an inhabitant of village Jajneswarpur in Murshidabad district and was a salt dealer. Subsequently he settled at village Kasba, a low lying forest area to about 3.5 kilometers north of Dubalhati. The zamindari estate was formed by an imperial sanad during the Mughal period comprising the Barbakpur pargana. After the death of Muktaram Roy Chowdhury, the 46th successor of the family, the zamindari estate was divided between his two sons, Krishnaram Roy Chowdhury and Raghuram Roy Chowdhury. Krishnaram got nine anna (nine-sixteenth) share of the zamindari estate while his brother Raghuram had seven anna (seven-sixteenth) share. After the partition of the estate, Krishnaram left Kasba to establish his new settlement at Mainam near Balihar while Raghuram had his changed residence at village Dubalhati. After the death of Krishnaram Roy Chowdhury leaving no issue, his wife sold the entire nine anna share of the estate to the zamindar of Balihar and Damnash while the successors of Raghuram continued to maintain their zamindari estate at Dubalhati. 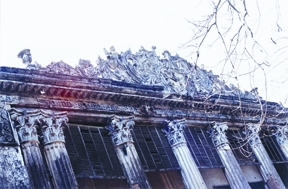 At the time of permanent settlement of 1793, Krishnanath, son of Shivanath was the zamindar of Dubalhati. Among the zamindars of Dubalhati, Haranath Roy Chowdhury was noted for his various social welfare activities. He extended the vista of his zamindari estate over the districts of Rajshahi, Bogra, Dinajpur, Faridpur and Sylhet. Himself devoid of institutional education he took intense interest in education and spent huge amount of money for promotion and development of education in his zamindari area. He established a tuition fee free lower secondary English school at Dubalhati in 1864. In 1873, he donated a property then valued almost one lakh rupees to the Rajshahi Zila School for its elevation to Rajshahi College, the annual revenue of the property being 5000 rupees. He opened a guest house at Dubalhati. In recognition of his relief and humanitarian activities during the famine of 1874, the British Government conferred upon him the title of 'Raja' in 1875 and title of 'Raja Bahadur' in 1877. But in 1884, the peasants under the leadership of Moulvi Astan Mollah of Hasaigarhi revolted against his autocracy and enhanced rate of land revenue, and stopped payment of taxes. Litigation on this issue continued for seven years. A compromise with the subject peasants was later executed by the initiative of his two wives, Rani Shyam Sundari and Uma Sundari through the mediation of the Settlement Officer. Haranath Roy Chowdhury died in 1891. Amarendra Nath Roy Chowdhury was the last of the zamindars of this family on the eve of the abolition of zamindari system in 1950.

The zamindars of Dubalhati built a beautiful and magnificent two storeyed palace at Dubalhati covering an area of 2.45 acres of land. The palace seems to have been built at the end of the nineteenth century. There are four big ponds, one on each side of the palace. The palace is divided into four self-contained portions, such as ball-room or theatre, kachari (estate office), zenana (interior) and kitchen. There are nearly one hundred rooms in the two floors of the palace. This north-frontal palace represents the Indo-European or colonial style of architecture. Once a very attractive and pleasant edifice, it is now almost in ruins. [Kazi Mostafizur Rahman]