Duckweed (khudipana) common name for a group of free-floating aquatic angiospermic plants of family Lemnaceae under the group Monocotyledons. Duckweeds are so named because they are eaten efficiently by waterfowls. The plants also possess characteristics of a weed. They proliferate quickly out-competing other plants and can thrive despite environmental constraints such as drought, cold, deficiency in nutrients, etc. Although duckweeds are flower bearing plants, very seldom do they form flowers, reproduction mainly occurs by vegetative bud formation. Duckweeds have been known to occur in Bangladesh at least one hundred years. 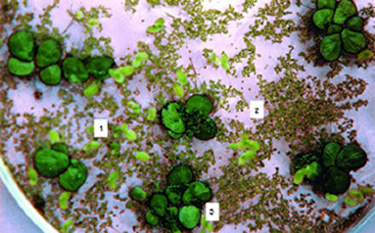 The duckweed family comprises of 4 genera, Lemna, Spirodela, Wolffia, and Wolfiella, and 34 species. Of these, 6 species (under 3 genera) namely, Lemna perpusilla, L. trisulca, Spirodela polyrhiza, S. punctata, Wolffia arrhiza, and W. mircoscopica have so far been reported from Bangladesh. The three available genera of duckweeds can be easily identified by their distinctive general appearances. In general, duckweeds are small plants floating freely on the surface of water. They do not have distinct stems and leaves. The whole plant body is reduced to form a flat small leaf-like structure called frond. The frond may live singly or in-groups, and may have one or more capillary roots hanging beneath. The fronds are usually bright to dark green. In Bangladesh Lemna is known as 'Tetulepana'. Its fronds are lanceolate to obovate, elliptic, oblong or round, 2-7 mm across. The Bangla name for Spirodela is 'Shonapana'; it has fronds reniform to obovate, glabrous, 5-12 mm long, often red undersides with several roots. In rural areas Wolffia is known as 'Shujipana'. It has globular to ovoid fronds, is 0.5 mm diameter and rootless.

Duckweed has its beneficial side also; under ideal conditions its biomass gets doubled in 24 hours. The protein content ranges from 6.8-40% of the dry weight. It is therefore, used as feed in aquaculture and livestock farming. Duckweed acts as an excellent biofilter to treat domestic wastewater. Fresh biomass of duckweed produced via domestic wastewater treatment plant can be integrated with fish and livestock production. Wolffia, when cultured, can be eaten by humans as a salad. It contains considerable amount of protein and the vitamins A and B. W. arrhiza is traditionally eaten in Myanmar, Laos, and northern Thailand.

Wind and sunlight sheltered pond-like water bodies with an almost constant supply of nutrients are ideal places for duckweed cultivation. Duckweeds can tolerate a wide range of pH, somewhere between 4.5 and 7.5, and temperatures between 20 and 300C. The plant when grown in industrial wastewater can be hazardous because of its high absorption capacity of heavy metals. The plant may carry disease producing pathogens when grown in domestic wastewater. However, in a properly managed system the plant can be used to produce energy via ethanol fermentation, manure via composting, and can prevent water loss in arid climates. The effective oxygen production and carbon dioxide removal efficiency of duckweed have also been studied for its use as a potential cosmonautic plant. Ponds covered with duckweed show decreased mosquito larvae. [Moniruzzaman Khondker]