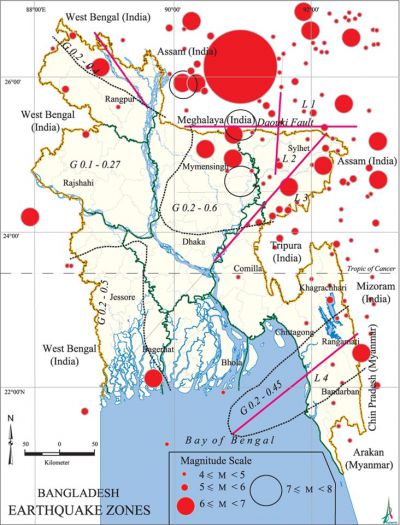 Earthquake trembling or shaking movement of the earth's surface. Most earthquakes are minor tremors, while larger earthquakes usually begin with slight tremors, rapidly take the form of one or more violent shocks, and end in vibrations of gradually diminishing force called aftershocks. Earthquake is a form of energy of wave motion, which originates in a limited region and then spreads out in all directions from the source of disturbance. It usually lasts for a few seconds to a minute. The point within the earth where earthquake waves originate is called the focus, from where the vibrations spread in all directions. They reach the surface first at the point immediately above the focus and this point is called the epicentre. It is at the epicentre where the shock of the earthquake is first experienced. On the basis of the depth of focus, an earthquake may be termed as shallow focus (0-70 km), intermediate focus (70-300 km), and deep focus (> 300 km). The most common measure of earthquake size is the Richter's magnitude (M). The Richter scale uses the maximum surface wave amplitude in the seismogram and the difference in the arrival times of primary (P) and secondary (S) waves for determining magnitude (M). The magnitude is related to roughly logarithm of energy, E in ergs.

Earthquakes originate due to various reasons, which fall into two major categories viz non-tectonic and tectonic. The origin of tectonic earthquakes is explained with the help of 'elastic rebound theory'. Earthquakes are distributed unevenly on the globe. However, it has been observed that most of the destructive earthquakes originate within two well-defined zones or belts namely, 'the circum-Pacific belt' and 'the Mediterranean-Himalayan seismic belt'.

Although Bangladesh is extremely vulnerable to seismic activity, the nature and the level of this activity is yet to be defined. In Bangladesh complete earthquake monitoring facilities are not available. The Meteorological Department of Bangladesh established a seismic observatory at Chittagong in 1954. This remains the only observatory in the country.

Before the coming of the Europeans, there was no definite record of earthquakes. Following is a chronology of important earthquakes from 1548.

Status of earthquakes Bangladesh is surrounded by the regions of high seismicity which include the Himalayan Arc and shillong plateau in the north, the Burmese Arc, Arakan Yoma anticlinorium in the east and complex Naga-Disang-Jaflong thrust zones in the northeast. It is also the site of the Dauki Fault system along with numerous subsurface active faults and a flexure zone called Hinge Zone. These weak regions are believed to provide the necessary zones for movements within the basin area.

In the generalised tectonic map of Bangladesh the distribution of epicentres is found to be linear along the Dauki Fault system and random in other regions of Bangladesh. The investigation of the map demonstrates that the epicentres are lying in the weak zones comprising surface or subsurface faults. Most of the events are of moderate rank (magnitude 4-6) and lie at a shallow depth, which suggests that the recent movements occurred in the sediments overlying the basement rocks. In the northeastern region (surma basin), major events are controlled by the Dauki Fault system. The events located in and around the madhupur tract also indicate shallow displacement in the faults separating the block from the alluvium.

In the zoning map, Bangladesh has been divided into three generalised seismic zones: zone-I, zone-II and zone-III. Zone-I comprising the northern and eastern regions of Bangladesh with the presence of the Dauki Fault system of eastern Sylhet and the deep seated Sylhet Fault, and proximity to the highly disturbed southeastern Assam region with the Jaflong thrust, Naga thrust and Disang thrust, is a zone of high seismic risk with a basic seismic co-efficient of 0.08. Northern Bangladesh comprising greater Rangpur and Dinajpur districts is also a region of high seismicity because of the presence of the Jamuna Fault and the proximity to the active east-west running fault and the Main Boundary Fault to the north in India. The Chittagong-Tripura Folded Belt experiences frequent earthquakes, as just to its east is the Burmese Arc where a large number of shallow depth earthquakes originate. Zone-II comprising the central part of Bangladesh represents the regions of recent uplifted Pleistocene blocks of the Barind and Madhupur Tracts, and the western extension of the folded belt. The Zone-III comprising the southwestern part of Bangladesh is seismically quiet, with an estimated basic seismic co-efficient of 0.04.

Mitigation approach The occurrence of earthquakes in an earthquake prone region cannot be prevented. Rather, all that could be done is to make a prediction and issue a warning for minimising loss of life and property. Although precise prediction is not always possible, an acceptable valid prediction of an earthquake will certainly minimise the loss of life and property. However, as far as Bangladesh is concerned a detailed geological map including the delineation of all crustal faults and lineaments is of prime importance. The Aeromagnetic survey of Bangladesh has already provided the pattern and distribution of such faults and lineaments. By now the delineation of faults within the Tertiary sections are well established, but the situation within the Quaternary section is quite uncertain. It is evident that Quaternary sediments are affected by various earthquake events in Bangladesh pertaining to uplift, subsidence, ground deformation and massive liquefaction. Since water plays an important role in fault creep and fault slip, a small amount of water can produce an effect on a lubricated surface for fault displacement with a stress drop of only 10 to 100 bars.

The earthquake disaster mitigation approach should be followed by (i) pre-disaster physical planning of human settlements, (ii) building measures for minimising the impact of disaster and (iii) management of settlements. [Sifatul Quader Chowdhury and Aftab Alam Khan]