Ershad, Lt. General Hussein M General, President of Bangladesh (1983-1990). He was born on 1 February 1930 in the Koochbihar district of West Bengal. Hussein Muhammad Ershad had his early education in Koochbihar and at his home-town Rangpur. He graduated from Dhaka University in 1950 and was commissioned in the Pakistan Army in 1952. During 1960-62, he was an Adjutant in the East Bengal Regimental Centre, Chittagong. He completed the Army Staff Course from the Staff College in Quetta in 1966. In 1968, he served as the Brigade Major of 54 Brigade in Sialkot. After getting promotion to the rank of Lieutenant Colonel in 1969, he commanded the 3rd East Bengal Regiment during 1969-70 and the 7th East Bengal Regiment during 1971-72. 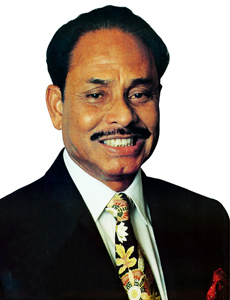 Soon after the assassination of President Ziaur Rahman on 30 May 1981, Ershad's interest in politics became apparent through his frequent statements in the media. On 24 March 1982, General Ershad usurped state power by removing the then constitutionally elected government of President abdus sattar. General Ershad declared himself the Chief Marital Law Administrator (CMLA), suspended the Constitution and dissolved the Jatiya Sangsad and the council of ministers appointed by President Sattar. He also proclaimed himself commander-in-chief of the armed forces, a constitutional post held by the elected President. He announced that the future martial law regulations, orders and instructions would be the country's supreme law, and sections of other laws inconsistent with them would be null and void.

The martial law proclamations became the source of laws, and Ershad started making laws at will through martial law regulations, orders and ordinances. He installed Justice abul fazl mohammad ahsanuddin chowdhury as President of Bangladesh on 27 March 1982. Justice Ahsanuddin Chowdhury did not have any authority as the marital law proclamation categorically mentioned that the President would not exercise any power or perform any function without the advice or approval of the CMLA. General Ershad ruled the country as the Chief Martial Law Administrator till December 1983. He then took over the country's Presidency on 11 December 1983.

Ershad made very significant change in the local government system by introducing the upazila system in the country in 1984. The first elections to the upazila parishads (councils) were held in May 1985. He was elected to the Presidency for a five-year term in October 1986 as a nominee of jatiya party which he had established in the same year. His election was however marred by the absence of notable participation by the leading political parties. Earlier, some major political parties also boycotted the staged parliamentary elections of May 1986. Ershad's Jatiya Party could manage absolute majority in the 3rd Jatiya Sangsad. Although the Awami League participated in it, Bangladesh Nationalist Party (BNP) boycotted that election. After getting elected as President, Ershad summoned the second session of the 3rd Jatiya Sangsad on 10 November 1986. He revived the Constitution through the enactment of Seventh Amendment Act. Martial Law was withdrawn through a proclamation. The proclamation ratified Ershad's 24 March 1982 take-over and validated all orders and actions made under his proclamations, regulations and orders.

The 3rd Jatiya Sangsad was dissolved by the President on 7 December 1987 in the face of a strong opposition movement against Ershad's irregular regime. The parliamentary election that followed on 3 March 1988 was boycotted by all major opposition political parties. Amidst a relentless combined movement waged by the opposition, Ershad was finally forced to step down on 6 December 1990.

General Ershad was subsequently arrested in 1991 and kept confined in prison. In the Jatiya Sangsad elections of 1991, he contested from jail in five constituencies of Rangpur and won in all the seats. The BNP government instituted a number of cases against him on charges of corruptions. He was found guilty and convicted in some of those cases. In the 1996 general elections, he again secured five seats for himself in the Jatiya Sangsad. After six years of confinement, Ershad was released on bail on 9 January 1997. He, however, lost his membership of the Jatiya Sangsad due to convictions by the court. The Jatiya Party was divided into three groups in 2000; Ershad still leads one of the factions.

Governance successes The Ershad era (1982-1990) will be best remembered for the introduction of Upazila local government system at thana level throughout the country. The 'thanas' were created by the British colonial rulers mainly as police stations to maintain law and order. A local government unit at thana level was constituted for the first time in 1959 to coordinate and supervise the development activities of the union councils. President Ershad sought to emphasize people's participation in administration and planning through effective devolution of decision-making power in favour of the people at the local level. This concept of decentralisation and devolution was translated into upgrading upazilas as the focal point of development administration. With this objective, the Local Government (Upazila Parishad and Upazila Administration Reorganisation) Ordinance was promulgated in 1982 providing the legal framework of local government at the upazila level. In ten phases up to February 1984, 460 thanas were upgraded as upazilas.

Under this law, upazila parishad was designated as a body consisting of the representative members as well as technical and professional functionaries. Beside the chairmen, who were the chief executives of the parishad and were directly elected by the people, an upazila parishad comprised of elected union parishad chairmen as representative members, chairmen of Upazila Central Cooperative Association, three women members, one nominated member and official members. The elected chairman of the first upazila parishad assumed office on 25 January 1985. Ershad was also credited with activating zila parishads or district councils in 64 districts of the country.

Another major achievement of President HM Ershad was his success in carrying forward the initiative taken by late President Ziaur Rahman for forming the south asian association for regional cooperation (SAARC), comprising of seven countries located in the Indian sub-continent. After about four years of groundwork from 1979, an integrated programme of action was formally launched for the purpose in August 1983 at a conference of the South Asian foreign ministers. Two years later, the heads of state and government of the region gathered in Dhaka on 7 December 1985 at the invitation of President HM Ershad. It was during this first summit of South Asian leaders that the historic decision to form SAARC, comprising India, Bangladesh, Pakistan, Nepal, Bhutan, Sri Lanka and Maldives, was finally adopted.

HM Ershad took measures for privatisation of state-owned enterprises and growth of the private sector in the country. These included denationalisation of three state-owned banks, Uttara, Pubali and Rupali; a number of private commercial banks and insurance companies were allowed to be floated for the first time in the country during the mid-1980s. The Ershad government also initiated moves for reorganisation and restructuring of the country's administrative system. The number of districts was increased from the original 22 to 64 by upgrading the sub-divisions. These in turn comprised of 460 upazilas. The restructuring of public administration was recommended by a committee for administrative reorganisation and reform, which was constituted by Ershad on 28 April 1982 with a view to devolving central authority and decentralising power.

The unified Bangladesh Civil Service was divided by the Ershad government into 30 cadres on the basis of their functional differences; the cadre composition and recruitment rules were formulated for giving formal shape to the structures, functions and compositions of the civil service cadres. Side by side, the Government Servants Conduct Rules and Discipline and Appeal Rules were framed to bring them under a disciplinary framework. A separate Directorate of Women Affairs was set up by the Ershad government in 1984 for catering to the socio-economic needs of the womenfolk. One aspect of Ershad regime was the induction of many officers from the armed forces into civil administration. He abolished many government departments and merged many others for econmising the administration. Ershad also made an attempt at decentralisation of the administration of justice by running High Court benches outside Dhaka; but the measure could not be eventually sustained due to the non-cooperation of lawyers and members of the judiciary.

The Ershad government sought to undertake much needed land reforms in the country and formed a committee for the purpose in 1982. The committee submitted its report in January 1983 and the government accepted several recommendations of the report. A national implementation committee for land reforms was formed in August 1983. On the basis of discussions and suggestions of this committee, the Land Reforms Ordinance 1984, Land Reforms Rules 1984 and Agricultural Labour (Minimum) Wages Ordinance 1984 were promulgated. A land reform campaign was launched in March 1987 to expedite the implementation of the land reform measures. The objectives of this campaign included: distribution of khas land among the landless, near-landless and marginal farmers; establishment of cluster villages on government land for the landless under the programme 'Operation Thikana'; providing legal rights to the share-croppers; ensuring optimum utilisation of hilly lands, fisheries and shrimp-land for increased production; contributing towards higher agricultural productivity and greater equity in the distribution of rural income; helping reduce rural-urban migration. However, like many other initiatives of Ershad, his land reform initiative also turned out to be a failure, mainly because of corruption and inefficiency of civil bureaucrats.

A new industrial policy first put into operation in June 1982 by Ershad was further revised in 1986 to make its provisions more liberal for private sector investments. The growth rate in the industrial sector during the rule of HM Ershad was quite remarkable, especially in the small and medium scale enterprises (SME) sub-sector that included readymade garments. The emphasis of his economic programmes was on private-sector led growth in all spheres. It was the Ershad government which set up the Board of Investment in 1989 as a statutory body to help the private sector invest in industrial development and play a more energetic role in the national economy. The President of the country was made the head of the board while its day-to-day affairs were run by an executive council. It was also Ershad who launched the bid for construction of the Jamuna Multipurpose Bridge by levying taxes on the common citizens and contacting donor agencies including the World Bank and Asian Development Bank to collect funds for the project. Some other innovative initiatives of Ershad included formation of the 'Pathakali Trust' to cater to the needs of street-children and initiation of a comprehensive environmental action plan in the country.

HM Ershad has been given the title 'Palli Bandhu' (Friend of the Villages) by his party loyalists in recognition of his role in undertaking development measures very earnestly. [Helal Uddin Ahmed]