Fakir-Sannyasi Resistance an armed resistance of the combined body of Muslim fakirs (sufis) and Hindu sannyasis (yogis) against the dominance of the English East India Company in Bengal. This resistance began in 1760 and continued for more than four decades. The most striking point in this prolonged resistance of the mendicants is the cause behind the movement. The reason is still left obscure. It seems that the regulations of the East India Company seriously disturbed the ways of life of the Muslim fakirs and Hindu sannyasis thereby pushing them to make common cause and to take resort to armed resistance. Both the groups of mendicants lived on alms provided by their followers mostly in the villages. The Company rulers, who little understood the religious institutions of the country, took their alms collection drive for unauthorised impositions on the village people. The government thus issued decrees banning collection of alms by the organised groups like the fakirs and sannyasis. In response, they started a resistance movement against the Company rulers. The resistance movement got ready support from the peasantry for their religious attachment to the mendicants and also having been hard pressed under the new land revenue policy of the Company government.

The resisting fakirs belonged to the Madaria tarika, a sufi sect which flourished in Bengal under the leadership of Shah Sultan Hasan Suriya Burhana in the second half of the seventeenth century. The sannyasis were the Vedantic Hindu yogis belonging to the Giri and Puri groups of ek-dandi sannyasism. Both the fakirs and sannyasis were armed bands living in khankas and akhdas respectively. In rituals and practices there was good deal of affinity between the sufi fakirs and yogi sannyasis and that contributed to their common alliance against the alien rule.

The Fakir-Sannyasi Resistance movement was organised and led by majnu shah, a sufi saint of Madaria sect. He succeeded Shah Sultan Hasan Suriya Burhana to the leadership of the Bihar based Madaria sufi order in the mid-eighteenth century. He had his lieutenants in the persons of the sufis like Musa Shah, Cherag Ali Shah, Paragal Shah, Sobhan Shah, Karim Shah etc. Bhabani Pathak, a Bhojpuri Brahmin, who had discourse with Majnu Shah and also had communication with a petty zamindar Devi Chaudhurani, led the sannyasi rebels.

The Fakir resistance began in nebulous form in 1760 and gathered momentum in 1763. Their main target was the Company kuthi, revenue kacharis of zamindars loyal to the Company rulers, and the houses of their officials. The rebels used swords, spear and lances, gun, fire throwing device, hawai and even revolving cannons.

Among the fakirs only Majnu Shah and some of his lieutenants used horse while moving from one strategic place to another. Camels were used for carrying provisions and ammunitions. Their operations were mainly of guerilla nature. In most cases they attacked the Company personnel and their establishments in surprise. In regular operations and in specific battle there was often assemblage of five to six thousand fakir-sannyasis. The number of fakirs and sannyasis rose to around fifty thousand or more in 1770s. The rebels had their intelligence agents in the persons of the villagers who earlier transpired to them the movement of the Company troops. 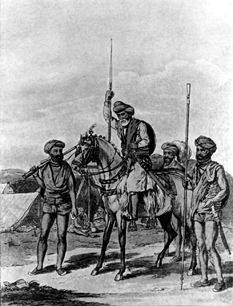 The rebels attacked the commercial kuthi of the Company at Bakerganj (1763) and kept the factory chief Calley confined for some days, and plundered the kuthi. In the same year they surprised Dhaka kuthi while its English supervisor Ralph Lester evacuated. However, Captain Grant subsequently recovered the factory. The same year, the rebels attacked Company kuthi at Rampur Boalia in Rajshahi, captured the factory chief Bennette who was sent to Patna as captive, where he was killed.

By 1767 the attack of the rebels intensified in Rangpur, Rajshahi, Kuch Bihar, Jalpaiguri and Comilla. To check the activities of the rebels in North Bengal an English army was sent to Rangpur in 1767 under Captain De Mackenzee. Meanwhile the rebels defeated an English contingent sent by Barwel, the Resident of Maldah, under the command of Myrtle who was killed by the rebels. At the approach of Captain De Mackenze with his army the rebels retracted towards Nepal. During 1768-70 fakir-sannyasi raids mainly continued in Saran (Bihar), Benares, Purnia, Rangpur, Dinajpur, Rajshahi, Comilla and Chittagong districts.

An army under Feltham suddenly attacked the fakir-sannyasis in 1771 on way to Ghoraghat and Govindganj in Rangpur, where they sustained a defeat and were dispersed. Majnu Shah proceeded towards Mahasthan with more than a hundred wounded followers. In 1772 Majnu Shah raided the establishments of the Company in the Rangpur, Rajshahi and Bogra districts. On one occasion, he along with hundreds of armed followers raided the revenue office of the Company at Rajshahi, captured the accumulated fund and kept the kachari under his control. The rebels conducted extensive raids in Purnia, Burdwan, Kumarkhali, Jessore, Mymensingh, Sylhet, Dhaka, Midnapore, Birbhum, Rangpur, Dinajpur, Bogra, Jalpaiguri in 1773.

Fakir-Sannyasi raids got intensified in 1776 in the districts of Bogra, Rajshahi, Dinajpur and Chittagong. During the period between 1777 and 1781 the fakir-sannyasi raids mainly continued in Bogra, Rajshahi, Rangpur, Chittagong, Sylhet and Mymensingh areas. The activities of the rebels took a serious turn in Alapsingh pargana of Mymensingh in 1782. After a severe battle at Pukhuria Majnu Shah receded into the Madhupur jungle with his followers. In 1785 he proceeded towards Mahasthangarh and was defeated in a battle. In the following year, Majnu Shah planned simultaneous attack in eastern Bengal under himself and in North Bengal area under his lieutenant Musa Shah. In a battle against the Company army under Lieutenant Brenan in Kaleswar area (8 December 1786) Majnu Shah lost a large number of his followers, and some of his wounded followers were carried to Mewat. After 1786 Majnu Shah is not seen to lead any expedition. It appears that he himself was wounded in the battle at Kaleswar and died on 26 January 1788.

After the death of Majnu Shah his able lieutenants like Musa Shah, Cherag Ali Shah, Paragal Shah, Sobhan Shah, Madar Baksh, Jari Shah, Karim Shah, Kripanath, Rowshan Shah, Anup Narayan and Sri Nibash continued the revolt till the closing of the year 1800 and even upto 1812 AD. But after the death of Majnu Shah the movement was gradually losing its direction and dynamics. By the late 1790s, the revolt began to be subsided only to wither away in the form of stray resistance in the subsequent decade. [Muazzam Hussain Khan]