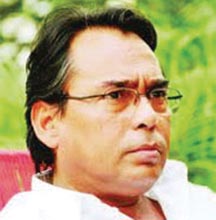 Faridi, Humayun (1952-2012) an actor and drama organiser. Humayun Faridi was born on 29 May 1952 at Narinda in Dhaka. His father was ATM Nurul Islam and mother Begum Farida Islam. Humayun Faridi got his primary education at his native village Kaliganj. He passed SSC examination from Madaripur United High School in 1968 and HSC from Chandpur College in 1970. Humayun Faridi got himself admitted in BSc (Hons) in the Department of Organic Chemistry of dhaka university in 1970. But due to war of liberation in 1971 he could not continue his studies in Dhaka University. After the liberation, he got himself admitted into BA (Hons) in Economics in jahngirnagar university and secured first position in first class in final BA (Hons) examination. During his university life he joined Dhaka Theater Group in 1976, and as chief organiser of drama festival in Jahangirnagar University he could draw attention of the distinguished personalities attached to the field of drama.

During the post liberation period, the Village Theater had a pioneering role in making the ground for promotion of dramatic style of the Bangalis and the main initiators behind it were the drama personalities like Selim Al-Deen, Nasir Uddin Yusuf Bachchu, Afzal Hossain, Golam Mostafa, Pijush Bandopaddhay, Subarna Mostafa and Humayun Faridi. He installed himself in stage theater through his direction in the drama Bhut organised by the Dhaka Theater Group.

In the face of crisis of opera house in Bangladesh, Humayun Faridi continued the display of his dramas in the theater stage of Mohila Samity and of Guide House. He acted in a number of stage dramas and earned immense popularity. The stage dramas in which he acted include Sakuntala, Kirtankhola, Keramot Mangal, Muntasir Fantasy, Fani Manasha, Dhurta Wie. He floated a number of drama-oriented organisations with an object of performing the stage-dramas of which the most prominent were the Group Theater Federation and Gram Theater.

Humayun Faridi earned wide reputation through his acting in the role of vilain in Bangla cinema. He simultaneously acted in both art film and commercial films. In the field of art film, he acted in cinemas like Hulia, Bachelor, Matritva, Bhohubrihi, Aha! and the liberation war based cinema Joijatra, Shyamol Chhaya, Ekattorer Jishu. He was awarded National Film Award in 2004 for his acting in Matritva. The commercial films he acted in were Dahon, Sontras, Bhondo, Mayer Marjada, Bishva Premik, Adhikar Chai, Tyag, Return Ticket, Praner Cheye Priyo, Kokhono Megh Kokhono Brishti, Duratta, Padma Nadir Majhi.

Humayun Faidi taught as a guest teacher on the art of acting for sometime in the Department of Theater of Dhaka University. He played a vital role to defend of the access' obscenity in the Bangla film.