Farming System a set of organised conditions for production of crops, livestock, fish, agroforestry, etc. Farming system includes the procedure of using the land, labour, inputs, and capital to manage farm, household, non-farm and off-farm production, and consumption to meet its objectives and priorities under a certain physical, biological and socio-economic conditions. A farming system is not simply a collection of crops and animals to which one can apply his input and expect immediate results. Rather, it is a complicated interwoven mesh of soils, plants, animals, implements, workers, other inputs, and environment.

In mixed farming, cropping, livestock, poultry, fisheries, and possibly other enterprises are present within the farming system. In Bangladesh, different production systems are practiced. Most of the large farms may have more than one enterprise that may be complementary or supplementary depending upon the situation. For example, some production systems are Crop-Cattle-Goat-Poultry-Fish, Crop-Cattle-Buffalo-Poultry, Cattle-Goat-Poultry, Crop-Fish, etc. 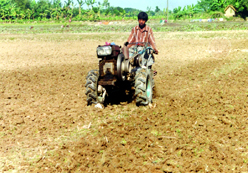 Bangladesh being an agricultural country, where vast majority of people depend directly upon their own farm production for survival, the country's agriculture is complex, labour-intensive and has a low technological and resource base. Agroecological conditions are complex in most parts of Bangladesh. There are several distinct land types in the country. In any village, at least three major land types exist and make land use very complicated. There are 20 soil units that differ in their soil characteristics.

The introduction of farming systems research (FSR) in Bangladesh has its root in the cropping systems research (CSR) that began in 1974 at the bangladesh rice research institute (BRRI). CSR is an integrated approach to the development of more production and profitable patterns acceptable to the farmers by inclusion or exclusion of crops and/or varieties, and by improving efficiency of management practices. It involves a multidisciplinary team of researchers to design, implement and interpret on-farm research. The team generally includes agronomists, agricultural economists, soil scientists, pest management specialists, etc. CSR as originated by the International Rice Research Institute (IRRI) centres around the rice. The methodologies have been developed and refined by the institutes participating in the Asian Cropping Systems Network, now redesigned as the Asian Farming Systems Network with some modifications in the methodologies. The Bangladesh Rice Research Institute became a member of the Asian Cropping Systems network from the very beginning and pioneered research activities on rice based CSR in Bangladesh since 1974. 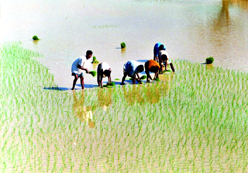 In 1980 the bangladesh agricultural research council (BARC) initiated the National Coordinated Cropping Systems Research Programme (NCCSRP) with the objectives of helping (a) attain self-sufficiency in food at higher levels of per capita consumption and with more balanced diets through increased production of cereals, oil seeds, vegetables, etc, and (b) increase income and income generating activities and thereby upgrading the quality of life of the farming community.

Six national organisations and a voluntary agency participated in the programme. A technical working group was formed by BARC, which surveyed and reviewed on-going programmes. The members of the coordinated programmes are BRRI, Bangladesh Agricultural Research Institute (BARI), Bangladesh Jute Research Institute (BJRI), Bangladesh Sugarcane Research Institute (BSRI), bangladesh agricultural university (BAU), bangladesh water development board (BWDB) and Mennonite Central Committee (MCC, an NGO). The primary aims of the programme were to study cropping systems in a selected area, to identify technologies to improve the efficiency of the use of farmers' resources, and to introduce possible new technologies under rainfed and irrigated conditions. 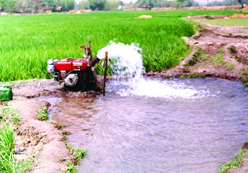 Irrigation by a shallow tubewell

The methodologies used in the programme were that of the Asian Cropping Systems Network with slight modifications made by the BARC. The sequence of the methodology comprises six distinct phases namely, (i) site selection, (ii) site description, (iii) design of alternative cropping patterns, (iv) testing of alternative cropping patterns, (v) pre-production testing and pilot production programme, and (vi) production programme formulation. In 1985 the above NCCSRP project evolved as a National Coordinated Farming Systems Research Project on the basis of the experiences gathered from the NCCSRP projects, with a further wide dimension and scope. This has the broader objectives of helping (a) attain self-sufficiency in food and with more balanced diets through increased production of cereals, oil seeds, pulses, vegetables, fish, milk, mutton, beef, eggs, etc, and (b) increase the income of poor farmers and raise the productivity of labour with special emphasis on women and landless labourers. 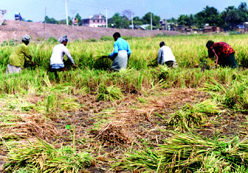 In Bangladesh like other countries, farming systems research views the whole farm as a production unit and the household as the consumption unit. Researchers on farming system, however, demand that the resources of the farmer be given major emphasis so that any improved technology can be accepted. In addition, farm resource utilisation should be considered together with the' production technology in arriving at an improved farming system. [Md. Serajul Islam]

Land preparation Cutting, pulverizing and leveling the soil for sowing seeds, or planting seedlings are of prime importance in crop production process. Virtually, in Bangladesh first operation is performed with the traditional bullock drawn ploughs. Subsequent operations include bullock drawn or manually used equipment for pulverizing and leveling the soil. About 11 million draft cattle heads supply power for agricultural and intercultural operations. Very recently the use of power tillers in land preparation felt necessary due to massive adoption of modern crop varieties. More than 100,000 power tillers are now in operation in Bangladesh.

Seeding and planting Since ancient times the planting operation of the major crop (Aman rice) is mainly accomplished by the traditional hand transplanting methods. Group transplanting of rice is very common scenario in Bangladesh. Very recently manually operated mechanical transplanters are being introduced at institutional level. Other grain crops such as wheat, maize, pulses etc are cultivated by dry sowing methods. However, herbs, shrubs, bushes and trees are always manually planted.

Weed control Weed control at present mainly depends on the indigenous hand tools. But in the low land rice cultivation in rows, the operation of rotary type hand weeders is being used.

Crop protection Insecticide applications for plant protection is mainly done by knapsack type sprayers. In 2005, the total consumption of formulated pesticide was about 25,466 m tons. Major portion of this, however, was used for rice pest control.

Processing Rice processing industry is one of the largest in Bangladesh. More than 27.8 million m tons of paddy is produced annually in this country. Of the total production about 80 to 90% or more is processed by scatteredly situated 'Engleberg' hullers with approximate capacities of 0.5-2.0 metric ton/hr. Before the introduction of 'Engleberg' mills the total production (about 10 million metric tons/year) was being processed manually with traditional dhekis and gails by rural women. The dhekis and gails have almost disappeared from the rural households due to massive introduction of mechanized milling systems. At present there are about 100,000 Engleberg and about 500 automatic rubber roll rice mills in Bangladesh. [Mohammad Abdul Baqui]

Farm management problems constraints and difficulties associated with activities to achieve the targeted goal of satisfactory production of crop. There are many social and natural problems that hamper the farm management practices in Bangladesh. Some of such major problems are:

Continuous rice cultivation nowadays, many farmers grow rice continuously in the same piece of plot. As a result, the nutrients, used by the rice plants, deteriorate continuously from these plots, creating imbalance of nutrients. Proper crop production management is necessary for better profit and maintaining soil health.

Land ownership and village politics village politics and quarrels make the social problems, and unrest in the village society hampers the farm management and ultimately the crop production. Due to the increasing trend of urbanization after independence, many people are leaving for urban areas for better livings. As a result, the farmlands of those people remain uncared and even fallow.

Socio-economic changes in villages the socio-economic situation has changed after independence. The living standard of village people raised with the development of communication system, education facility, healthcare facility, industrialization, and political motivation. As a result, dropout people from the educational institutes went for small business, and started working in factories, and in other places. Such situation created a vacuum for crop production management due to scarcity of experienced and potential manpower for agricultural works.

Irrigation unavailability of water, lack of irrigation policy, and difference of opinion among village people hampers the irrigation of crop field that leads to lower yield.

Labour scarcity nowadays, due to change of occupation, increased rate of literacy, better and less laborious job opportunity in industry/factory, migration to other countries created a labourer shortage in agriculture. As a result, some cultivable lands remain fallow that affects the national income and creates farm management problems.

Inputs scarcity of inputs such as seeds, fertilisers, insecticide, is an acute problem of crop production.

Use of chemicals intensive and irrational use of different chemicals pollutes the environment that endangers the soil organisms, and other flora and fauna.