Fath Khan's Tomb lies within the gaur citadel in its eastern part of the kadam rasul enclosure. It was built in imitation of a vernacular do-chala hut. It is generally regarded as the tomb of Fath Khan, the son of Dilir Khan, a general of Aurangzeb sent by him to subdue shah niamatullah, the patron saint of shah shuja. Although no contemporary historian has mentioned Fath Khan, tradition has it that this is the tomb of Fath Khan who fell ill in Gaur after arrival with his father, and possibly died here. 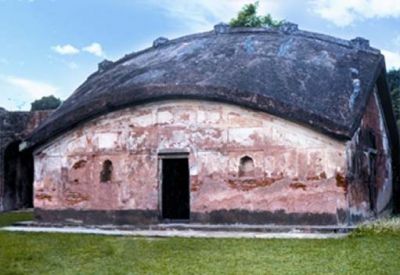 The tomb measures externally 9.35m by 8.35m and has three lintelled doorways on the west, north, and south. The curved ridge of the structure has been made prominent by raising it from the level of the gables and having it dotted with five stud or ring-head motifs. The building is entirely covered with stucco. Its walls have been patterned with rectangular plain panels. Arched niches flank the doorways. Although Abid Ali has cast doubt about the possibility of the building being a tomb, and it has been suggested that it is a temple the proximity of its location near Kadam Rasul, in fact, its position within the enclosure, makes it a Muslim monument - a tomb or a hujra (living place) of a saint. A similar do-chala structure, extant till a few years back at Biraldah in the Durgapur upazila of Rajshahi, but now embedded in the nearby mosque wall, is generally regarded as a hujra of the saint whose tomb is nearby. The difference between these two structures is that the former is a typical Mughal structure with plaster covering and panels, and the latter, a totally terracotta ornamented monument, signifying a date in the Sultani period. The suggestion that the Biraldah structure was a Hindu temple can be negated because of the existence of a Muslim saint's tomb nearby, and by the absence of images within the terracotta motifs.

The do-chala, like chau-chala (see chhota sona mosque), is very significant in the context of development of architecture in Bengal - be it a Muslim mosque or a Hindu temple.

In the mosque it was used as an anti-chamber, a gateway, and an ornamental motif in the form of a window dripstone, and in the temple as a structural form and curved cornice. The impact was noticeable even earlier in imperial Mughal architecture: two such small and beautiful structures are to be seen in the marble throne-canopy of Agra Fort and in the Nawlakha of Lahore Fort, both built during the time of emperor Shahjahan in the middle of the 17th century. The form has been beautifully adapted in the Mosque of NAEM (National Academy for Educational Management) near Dhaka College designed by architect Constantine Doxiades in 1965. [ABM Husain]