Fath Shah's Mosque is situated in the dargah complex in Nagar Sadipur village of Mograpara Union of Sonargaon upajilla, Narayanganj. The area is considered to be a part of the medieval capital of sonargaon. Restoration and repair works to the mosque have unfortunately, caused the disappearance of many of its original features. But some are still left to attest its archaeological importance. 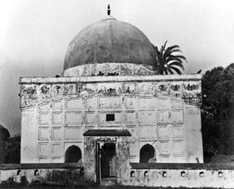 Built in brick with plaster, the mosque is oblong in plan, giving an outside measurement of 10.35m x 7.95m. The eastern facade has three archways, of which the central one is a little larger than its flanking counterparts. There is a single arched opening in the middle of the north and south walls, although the former is now blocked up.

The qibla wall has three semi-circular mihrab niches, of which the central one, made of stone, is bigger, having cuspings in its outer face. The mosque is internally divided into three sections - a large central square and the smaller flanking ones. The central division is roofed over by a big dome, while a half-domed vault covers each of the flanking ones. The dome is placed on a circular drum and crowned by lotus with a kalasa finial. The thrust of the dome is internally carried on the aforesaid flanking half-domed vaults and the blocked arches over the central mihrab and central doorway. The upper angles in between the blocked arches and half-domed vaults are filled with triangular pendentives. The cornices of the mosque are gently curved in the Sultanate fashion, while the parapets are horizontal in the Mughal style.

The mosque is entirely covered with plaster and is washed white with lime. The outer surface of the walls, just below the bent cornices, is variegated with rectangular panels in the usual Mughal fashion. The central mihrab, contained within a rectangular frame, has a cusped arch with spearhead ornamental motifs. A frieze of blind merlons tops the frame, which has now been painted. The two engaged semi-octagonal pillars, which support the mihrab arch, are divided into sections by slightly raised bands. A frieze of jail work crowns the top-most band. The facets of the engaged pillars are marked with cusped arches, from the apex of which hangs down a chain and bell design. Immediately above the mihrab arch is a large tiered rosette, while its spandrels are ornamented with intersecting scrolls with small rosettes. The apex of the dome is internally marked with a large medallion, which is again distinguished by a tiered rosette. All these are executed in stucco.

The mosque has at present two inscriptions - one over the central doorway and the other now fixed on the wall of the graveyard opposite the mosque. The Persian inscription over the doorway records the date as 1112 AH/1700-01 AD. The other inscription is in Arabic and gives the date as 889 AH/1484 AD. It is likely that the mosque was originally built during the reign of Sultan jalaluddin fath shah in 1484 and subsequently thoroughly repaired or rebuilt with a new roof of dome and vaults in the Mughal period in 1700-01. The apparent Mughal features are thus due to later renovation works. [MA Bari]