Fern any pteridophyte plant having few leaves, large in proportion to the stems, and bearing sporangia on the undersurface or margin. It is a primitive group which is distinctive in having a characteristic arrangement of leaf in the bud. It is coiled in a manner known as 'circinate vernation'. During onward development the coiled bud elongates and becomes uncoiled assuming a fiddlehead shape or the familiar Crozier. There are about 12,000 species of fern now living in the humid tropics; common representatives are sword ferns, lady ferns, tree ferns, etc. 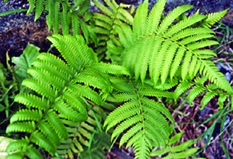 The young coiled leaves of some ferns are eaten as vegetables in many parts of the world including Bangladesh. In the Indian subcontinent about 900 species have been recorded. Bangladesh has about 250 species, found mostly in the northeastern hilly forests. Many epiphytes and some climbers are reported.

Aquatic ferns like Azolla, Salvinia, Ceratopteris are common in all waterbodies during monsoon. The tiger fern (Achrosticum aureum) is an integral part of vegetation in the sundarbans and other coastal regions. Due to habitat changes many ferns such as, Cyathea, Ctenitis, Lygodium circinatum, and many filmy and epiphytic ferns, are now facing different categories of threats.

Tree fern A good number of ferns are shrub-like or giant tree-like. Such large ferns are popularly known as tree ferns. About 300 species of tree ferns have their habitats in the tropical and sub-tropical parts of the world. They generally grow in fairly cool and high humid localities, usually at fairly high elevations where they are bathed by mists, fogs and rains. They may attain a height of about a metre to 20 metres. The trunk of the tree fern is quite different from the common tree trunk; there is no secondary growth and only apical growth. A crown of leaves are present at the tip of the trunk like in the common palm. But the young leaves are commonly found coiled at the centre of the crown in characteristic fern fashion. The matured leaves act as a reproductive organ by producing a spore on the undersurface. About 200 million years ago tree ferns flourished and constituted the dominant vegetation of the world. The famous coal beds of Carboniferous age have mostly evolved from these group of plants.

The present-day tree ferns belong to genera Cibotium, Dicsonia, Cyathea and Angiopteris. Of these only three species under Cyathea, (C. gygantea, C. glauca and C. spinosa), and one species under Angiopteris (A. evecta) grow in the eastern hilly regions of Bangladesh. Of these C. spinosa and C. gygantea are considered as threatened species. [Mostafa Kamal Pasha]