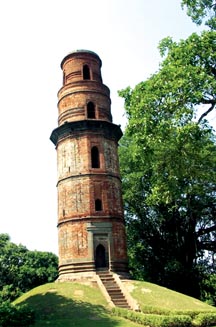 Firuz Minar one of the most famous of the surviving monuments of Bengal built according to an inscription by Saifuddin Firuz Shah (1488-90 AD), the second ruler of the Abbyssinian Slave dynasty. Built in brick, 26m high with a base diameter of 6m, it stands outside the citadel of gaur as its eastern side on the north-eastern edge of a large mound that is probably the site of the mosque to which it was once attached. The minar thus resembles the Qutb Minar at Delhi, being a majana, and at the same time a victory tower proclaiming the victory and glory of the sultan and of the religion to which he and the community belonged.

The position of the minar in the centre of the city suggests that it must have been a place for assemblaze, that is to say, a central esplanade for spending time and enjoying the city view from its top. It should perhaps be mentioned here that a minar of such a height was unnecessary for muajjn’s call, since a minar was not regarded as an inevitable adjunct to a mosque. In fact, after early Islam the existence of a minar, either attached to a mosque as majana, or built singly, amounted to symbolizing the glory of the land and its builder. The Firuz Minar at Gaur could not be otherwise, and is in line with its predecessors in India or outside, particularly in Iran.

The lower part of the minar below the doorsill was once covered with a platform of coarse marble, but is now filled with earthen work. A flight of steps now leads the visitor to the entrance of the minar, which originally had a door of Shal wood. The minar is five storeys in hight, the three lower storeys are twelve sided, and the upper storeys are separated by a dripstone, becoming less and less large in diameter. The last storey, which no longer exists, was originally an open pavilion covered by a dome. While the rounded portion of the minar is marked off from the lower part by the dripstone, all the twelve-sided storeys are separated from each other by horizontal stone string mouldings.

There is a spiral staircase of seventy-three steps inside the minar, and this leads one to the top of the tower, now finished off with a flat roof. All the storeys of the minar are pierced with window openings corresponding to the entrance doorway.

The decoration of the minar is confined mostly to the lower storeys. The faces are panelled, and these are ornamented with engrailed arch-motifs from where hang the chain and bell ornaments. Stone string-mouldings are bordered with lattice patterns, leaf and rosette designs, and dentil works. The entrance doorway, which is faced at the top with stone, is decorated with three big rosettes in spandrels. Above, the doorway frame has two horizontal string-mouldings, which are surmounted by a battlemented design. The slab of the blue stone forming the doorsill must have been taken from a Hindu temple as it is covered with figures apparently 'representing a boar hunt'.

The minar, also known as Firuza Minar because of its blue tile- work, resembles the chhota pandua minar, also a madhana and a victory tower in receding storeys and tile decoration. The independent existence of the minar has led to the contention that the tower was not a madhana. But the walls found in the mound on the southwestern side of the tower appear to prove sufficiently that there existed a mosque at one time. The door of the minar is on its southwest side and points toward the middle of the mound which must have been the central doorway of the mosque. The position of the minar in relation to the destroyed mosque is, in fact, the same as that of the position of the Bayana and Vijaymandargarh minars to their mosques. Moreover, Ghulam Husain Salim's information that 'a mosque, a tower and a reservoir' were erected by Sultan Firuz Shah leaves us with no doubt that the Firuz Minar was a majana. This is the exact description of the destroyed mosque and the surviving minar and the tank to its east.

The top of the minar was probably used at a later date by some pir (saint) for i'tikaf (meditation), and hence is sometimes known as Pirasa Minar. The local epithet Chirag Minar (chirag=lamp) probably has its origin in the muajjin's lamp hung to indicate the time of prayers and for other purposes. [ABM Husain]