Fishing Gear any form of equipment, implement, tool or mechanical device used to catch, collect or harvest fish. Fishermen in many parts of Bangladesh catch fish with their hands. In rural areas, in seasonal waters or beels, during winter, people can be usually seen fishing with different traditional gears while some even do so without any gear. The principal categories of fishing gears that are traditionally used in Bangladesh can be enumerated as the following:

Wounding gears Such gears are spears that are thrust, thrown or discharged. The following are the traditional wounding gears: Ek Kata; Tekata I; Tekata II; Anchda; and Koch. 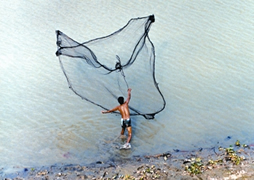 Line fishing Long lines in both freshwaters and in seawater, use of Bodshi and Charee in angling rods, single lines floated in rural rice fields and beels, etc, are typical line fishing methods used in Bangladesh. In line fishing the fish is usually attracted by a natural or artificial bait.

Traps Different traps made of bamboo sticks are used widely in rural Bangladesh. These are of various shaped chambers essentially having contrivances for the fishes to enter. Escape is prevented by automatic labyrinths or retarding devices. In rural Bangladesh during rainy season when there are floods people use these traps. Different traps seen in different parts of the country are Icber Chai; Bega; Duba Fund; Darkee; Unta; Tepai; Dheal; Cheng; Chari; Chandi Bair; Bana; Polo; Raboni; Anga; and Charo.

Nets On the basis of shape and size, and size of mesh, location of setting in the water, and the way they are used, nets are classified broadly into the following categories:

Bag net- Kept vertically open by a frame and held horizontally stretched by the water current. They can be kept set in water against the water current, as for example Behundi net and Sabadh net, Nets of similar shape but smaller in size are dredged and towed with the hand. 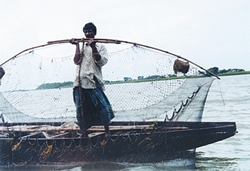 Drag net/push net- These nets are held apart with triangular bamboo frame and pushed manually. They are used in fishing in the traditional waters of beels and floodplains, locally called Thela Jal and Moiya Jal. Trawl nets are also a type of drag net.

Seine net- This type of net has very long wings and a towing rope. The nets are of various lengths and come with or without bags for catching and are locally called Bedh Jal. If the size is too big, it is called Jagot Bedh. The size of the mesh depends upon the size of the fish to be caught.

Cast net- a common net in Bangladesh; it is round-shaped when thrown to fully open and has got weights in the form of iron balls along a string set at the outer edge of the net. It is operated manually and used mainly in the shallows of ponds, beels, estuaries and in the coast.

Lift net- The common shape is square and it is fitted with two bamboo strips arranged in cross-bars and connected at the four corners of the net. The arranged crossbars with the net is then attached with another lever for lifting the net from out of the water.

The net is mostly hand-operated and portable. The net is locally called Dharma Jal. Sometimes the size could be made bigger and fixed at some strategic water areas eg Khoda Jal and Konaghar Jal.

Falling net- are of various sizes and shapes depending upon the habitat where they are used and on the type of fish to be caught. A type is mainly seen in northern Bangladesh which is a bigger version of the cast net locally called Othedh Jal. The twine used for this net is heavier and the mesh is also bigger than ordinary mesh. The weights used are heavier too. This net is used to catch fish from the deeps of rivers. About 5-10 people swim and carry the net, spread it out and help it to fall in the desired location of a water body. After setting the net, fishermen wait for hours. Then they start diving in the water to catch the fish. Sometimes they bring fish out of the net or they entangle the fishes with net and leave them there before pulling the net out. Another type of falling net, locally called Chhabi Jal, is used in shallow water; it is made with nylon net and rope. The mouth of this net is held apart with a heavy rope. The net is cone-shaped and the cone is tied with a string. When in use, the net is placed in the water and fishes are trapped inside and get entangled in the net. The other type of falling net is called Chak Jal. It looks almost like the Chhabi Jal. The mouth of this net is tied with a ring of bamboo strip. It is mainly used in rivers and beels during winter months.

Entangling net- a type of gill net used to catch fish by entangling the fish's whole body. The widely talked Current Jal is an example of this type of entangling net. The twine used is of monofilamentous material. The mesh size is variable, however, as the twine is monofilamentous when the fish approaches the net, it can get easily entangled in the net. [MS Shah]