Food Preservation method of keeping prepared or raw food materials for future use in a way that prevents spoilage or growth of microorganisms. The main objective of food preservation is to retain as far as possible the original value of food and to maintain its nutritive value as high as possible. 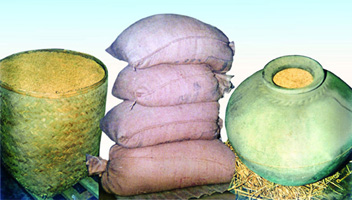 In Bangladesh different techniques are employed for food preservation including traditional methods such as salting, smoking, pickling, drying, and preserving in sugar. Modern food technology also uses many novel processes and additives, which allow a wider range of foodstuffs to be preserved.

Process of preservation may be generally classified as drying, heating, refrigeration, and the use of chemicals or other particular agencies, such as radiation. The common methods widely used in Bangladesh are briefly mentioned below:

Preservation by drying' This is the most ancient method and is employed for fruits, grains, vegetables, fish and meat. Sundrying of fish and meat was practised even as early as 2000 BC and dried vegetables have been sold for about a century. Drying of fishes in many parts of Bangladesh, particularly in Chittagong, Cox's Bazar, st martin's island, Sonadia and coastal areas is a regular practice. Huge amount of dried fishes are prepared both for local consumptions and for export. Dried fruits, specially mango and berries, are also produced by drying in the sun.

Refrigeration and deep freezing 'These techniques are used mostly in the urban areas of Bangladesh. Although a convenient form of preservation, this process cannot kill microorganisms, nor stop their growth completely. Household refrigeration is largely used for preserving vegetables, meat, fish, milk, egg, butter and other perishable items of daily use. Deep-freezing (18'C or below) stops almost all spoilage processes, although there may be some residual enzyme activity in uncooked food.

Canning' This technique relies on high temperatures to destroy microorganisms and enzymes. The food is sealed into a can to prevent any recontamination by bacteria. Meat, fish, vegetables, soft drinks and different fruits are now preserved by these techniques by several enterprises of the country.

Pickling 'It utilizes the effect of acetic acid found in vinegar in stopping the growth of microorganisms. Numerous types of pickles are prepared by several enterprises where besides vinegar, mustard oil, and different spices are used.

Chemical preservatives 'Chemicals have been used in the preservation of food for many centuries; sodium chloride, sodium and potassium nitrate, sodium salicylate, benzoic acid, ascorbic acid, vinegar, alcohol, and various spices are regarded as traditional preservatives. Concentrated sugar solutions are widely used in Bangladesh for preserving jams, jellies and murabbas.

Salting (or curing) has been used in preserving meat and fish since ancient times. The method is still being used often in combination with drying and smoking. The chief method of preserving hilsa fish is the use of edible salt (sodium chloride). [Rezaur Rahman]

Preservation by radiation Utilizes the application of ionizing radiation that inhibits the growth of pests and microorganisms, and thus extend the shelf-life of food materials. The Food and Agricultural Organisation (FAO) has estimated that about one-fifth of the world's food crop is destroyed by insects, mites, microorganisms and other pests. The losses approach nearly 50% in developing nations that have high temperature and humidity. It is also worth noting that the nutritional value of some foods can be improved by irradiation.

In the Institute of Food and Radiation Biology (IFRB), Bangladesh Atomic Energy Commission, research has been carried out on preservation and shelf-life extension of food items like cereals, pulses, potato, onion, fish, dried fish, poultry, fruits and vegetables. Pilot and semi-commercial scale irradiation and storage studies of food items such as, potato, onion, dried fish have been conducted in collaboration with wholesellers and traders. Packaging and storage studies of irradiated dried fish and pulses have also been conducted with a view to checking reinfestation of the radiation-treated products as well as to evaluate their commercial applicability. Nutritional and toxicological studies, including consumer acceptability trials and test marketing of irradiated products, have revealed favourable results of irradiation technology in Bangladesh. Research and Development activities of IFRB have been providing priority to a number of potential exportable agricultural commodities such as frozen shrimps, fish, fruits, vegetables and cut-flowers to increase their acceptability in the international market through ensuring quality and meeting quarantine requirements. Unconditional clearance for irradiation and human consumption of 13 food items including potato, onion, wheat flour and whole wheat flour, spices, chicken, fish and fish products (chilled and frozen), frozen shrimps, frog legs, rice and ground rice products, pulses, papaya and mango have already been given by the Government of Bangladesh.

IFRB of bangladesh atomic energy commission (BAEC) is the national agency responsible for implementing food irradiation technology for disinfestation and quality improvement of stored food and agricultural produces, for reducing storage losses, and for ensuring quality improvement. Research on food irradiation is primarily being conducted with the help of a 50,000 Ci Co60 gamma irradiator located at IFRB. A demonstration cum commercial Co60 irradiator plant namely, Gammatech Ltd has been set up at Chittagong as a joint venture project between Bangladesh Export Import Company (BEXIMCO) and BAEC for food irradiation and sterilization of medical products. Steps are underway for full-scale commercialization of food irradiation technology in order to reduce storage losses as well as to increase acceptability of exported food produces, including fruits and vegetables from Bangladesh, to the international market. [M Zahidur Rahman Majumder and Mainuddin Ahmed]