Freshwater Plant grow and live naturally in 'sweet water'. Water is called 'sweet' or 'fresh' when its salinity content is low. For example, while on an average seawater has a salinity of 35%, this value in freshwater is less than 0.5%. The main source of freshwater is via atmospheric precipitation which after falling on the earth's surface get deposited into the bellies of lakes, ponds, ditches, floodplains, rivers, channels, etc and serve as freshwater habitats. The most common forms of freshwater habitats of Bangladesh are haor, baod, beel, lake, pond, rivers, and floodplains. 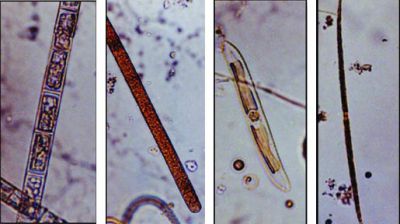 Many plant species starting from bacteria to higher angiosperms (flower-bearing plants) occur in freshwater. Natural freshwater is an excellent medium where the respiratory gases, eg oxygen and carbon dioxide, remain in dissolution. Other life supporting elements and nutrients such as hydrogen, nitrogen, sulfur, potassium, phosphorus, iron, magnesium, manganese, boron, etc also remain present in ionic form in water. Added to these is solar radiation which not only supplies necessary energy for photosynthesis of autotrophic organisms (green plants and chemosynthetic bacteria) but also generates heat for their survival. Various aquatic plants live in freshwater habitats by utilizing the gases, nutrients and other environmental and physical factors available in them.

A great variety of plants occur in Bangladesh freshwaters. These include bacteria, actinomycetes, fungi, algae, liverworts, mosses, ferns, angiosperm and lichen. Only one group of plant ie gymnosperm (naked seeded plant) does not grow in aquatic conditions. A look at a pond, lake or a river gives an idea of how many varieties of aquatic plant lives may occur in water. Some plants creep from the bank towards water, some are fully submerged, or partly under water and there are still others which float freely on the water surface. Putting a drop of a concentrated and sedimented sample of Lake Water under a microscope would reveal another world of aquatic plants. These are called phytoplankton, ie microscopic plants, that live in the free water and their movements are mostly directed by the action of the water current. Under the presence of abundant nitrogen and phosphorus compounds in the water coupled with the high temperature, some species of phytoplankton show luxuriant growth and make the water green or red to look at. This condition is called water bloom. Although water bloom is short-lived, it may kill fish or pollute water. Most common bloom forming phytoplankton of Bangladesh are Microcystis aeruginosa, Oscillatoria, Anabaena, Euglena, sanguinea, Volvox, Carteria, etc. Microscopic plants, mostly algae, remain attached to submerged objects such as brick particles, stones, branches of plants, etc and are called periphyton. Similar plant community attached to the submerged sand grain or to the mud surface are respectively called epipsammon and epipelon.

Among viruses very few are aquatic. These are virus A hepatitis, polio and cyanophage- a special kind of virus which attack blue-green-algal cells. Many bacteria grow in water. Bacterial pathogens causing cholera, shigellosis and typhoid are water borne. In addition, some other bacteria live in water. These are photosynthetic bacteria (Chromatium), sulfur bacteria (Thiospirillum), iron bacteria (Leptothrix) and many more which are associated with various transformation processes of nitrogen and nitrogenous compounds. Though called 'sewage fungus', Sphaerotilus natans is a filamentous bacteria. It has the ability to breakdown organic matter present in polluted water.

Actinomycetes are a group of fine filamentous and colourless plants. In aquatic habitats, they decompose dead organic matter, eg Actinoplanes, Streptomyces and produce bad odour in them. Fungi of water are multifarious both in habitat and type. Some unicellular chytrid fungus attack other planktons eg, Sphaerita attack Euglena; Podochytrium attack diatom and kill them. Filamentous fungus Saprolegnia live in aquatic environments and attack fish fries and other soft-bodied aquatic animals eg, rotifer. A special kind of plant named lichen (thallus formed by the symbiotic association of a fungus and an alga) are reported to grow in the eulittoral zone of a lake. The lichen Verrucaria live 95% of their whole life cycle underneath water. Other lichens reported from aquatic habitats are Parmelia and Umbelicaria.

The most common liverworts (Bryophyta, thalloid plants being not differentiated into root, stem and leaf) found in different water bodies of Bangladesh are Riccia fluitans and Ricciocarpus natans. No aquatic moss has so far been reported from Bangladesh, although mosses like Fissidens, Fontinalis, Sphagnum all grow in water in different parts of the world.

The number of algae growing directly in freshwater is quite large. Their size may range from extremely small (Nannochloris ca. 2 cm) to large macroscopic forms such as Chara, Nitelia (length ca 10 cm). In terms of habitat too, algae also show great diversity. Some examples are Scenedesmus, Pediastrum, Chlamydomonas, Volvox, Euglena (phytoplankton), Botrydiopsis, Lampropedia (these cling to the water surface and project their body in air; neuston), Nitzschia, Achnanthes, and Gomphonema (these remain attached to submerged sand grains; epipsammon), Oscillatoria, Spirulina, Navicula, Closterium (these form thin green to brownish layer on undisturbed submerged shallow mud surface; epipelic); and Oedogonium, Ophiocytium, Characium (these remain attached to submerged aquatic plant organs, periphyton). Basicladia (grows on the shells of tortoise) and Cladophora (grows on the shells of mollusk) are known as epizooic algae. 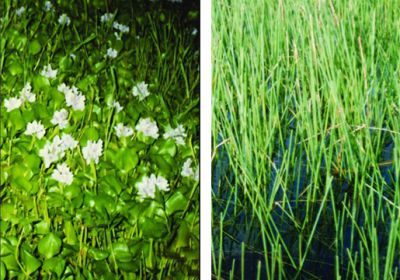 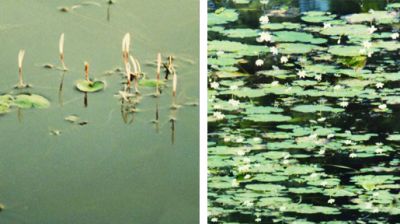 Many freshwater plants make important contributions to the food of human beings and cattle feed (such as several varieties of rice plants, Trapa, Nelumbo, Nymphaea, Ipomoea, Telanthera, Ottelia, and Hygroryza). Other large aquatic plants growing usually in the flood plains of Bangladesh are collected by farmers, dried and burnt to ashes or composted to make fertilisers. Many aquatic migratory birds build their nests in aquatic plants (such as Trapa, Phragmites, etc). Fishes lay their eggs and take shelter under many aquatic plants (Najas, Ceratophyllum, Hygroryza, Sagittaria, Monochoria, Eichhornia, lpomoea, Telanthera, Myriophyllum). These plants are also very useful for building the shed of the so-called kata fishery in beels, haors, baors, and rivers of Bangladesh.

However, some water plants can also be hazardous. By their proliferating growth they can chock water body, create obstacles for navigation, and kill fishes (eg, water hyacinth, duckweed, etc). Some can carry pathogens of cholera, shigellosis, etc from one place to another. Nevertheless, aquatic plants play an active role in maintaining the environmental balance. They are all primary producers of aquatic ecosystem having the ability to convert solar radiation into organic matter. [Moniruzzaman Khondker]