Ganges-Kobadak Irrigation Project a large surface irrigation system of the country set up by the bangladesh water development board (BWDB) on the right bank of the ganges. The project, better known as (G-K Project) covers an area of 197,500 ha, of which 142,000 ha are net irrigable, and are under the jurisdiction of Kushtia, Chuadanga, Jhenaidaha and Magura districts. A total of 13 upazilas of these 4 districts are covered by the project-Kushtia Sadar, Kumarkhali, Khoksa, Mirpur, Bheramara, Chuadanga, Alamdanga, Jhenaidaha, Harinakunda, Shailkupa, Magura Sadar, Sreepur and Daulatpur. The river Ganges and Gorai bound the project area on the north, The gorai-madhumati on the east, the nabaganga on the south, and the Mathabhanga on the west. The G-K Project represents an irrigation system in which water is lifted from the Ganges river by pumps and is distributed by gravity canals. Flood control and improvement of drainage are minor components of the system. The objectives were to increase food production, improve cropping patterns, increase cropping intensity, and improve the socioeconomic conditions of the farmers. 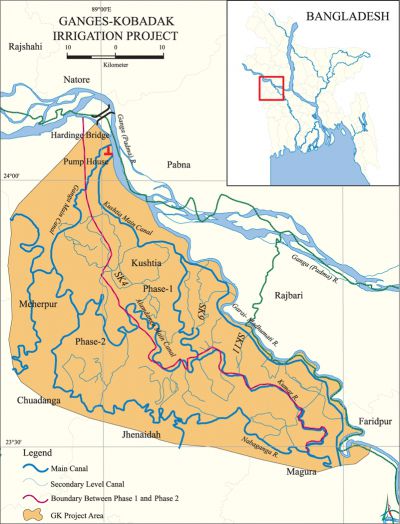 Initial survey to set up the project was conducted in 1951, but the Government of Pakistan approved the project proposal in 1954. Implementation of the project started during the fiscal year 1954-55. In 1962-63, some local varieties of rice were cultivated under this irrigation project for the first time. At that time HYV (high yield variety) rice was not available in the area. Afterwards, cultivation of HYV rice became popular among the farmers, especially HYV aush and HYV aman in Kharif-I (March to June) and Kharif-II (mid-July to November) respectively. The project was planned and designed for supplementary irrigation alone, but it is currently being utilised to irrigate an additional HYV aus crop that has a higher water demand. Till 1999, the maximum achievement of irrigation reached 43,000 ha in the aman (Kharif-II) season, while 99,000 ha were irrigated during the aus (Kharif-I) season.

However, the project has suffered from problems both at the implementation and operational stages. Water use has been considerably higher than anticipated and this has led to a reluctance to develop the full irrigable area. Operations to extract water from the Ganges are made difficult because dry-season water levels are significantly below the level for which the pumps were designed, and up to one million cubic metres of slit has to be dredged annually from the canal leading from the Ganges to the pump house. Rehabilitation work to increase the capacity of the water delivery system was initiated in 1984 and completed in 1993.

In the GK system, water is pumped from the river Ganges and distributed to the field by gravity. The project has two pump houses with pumps having various capacities. Three main pumps with a designed capacity of 37 cumec each, and 12 subsidiary pumps with a capacity of 3.5 cumec each are used for pumping water from the river to the main canal. The total lifting capacity of these 15 pumps is 153 cumec. There are two main canals - the Kushtia Canal and the Ganges Canal. The service area of the Kushtia Canal, which started functioning in 1969-70, is called Phase-I. The service area of the Ganges Canal, functioning since 1982-83, is called Phase-II. The project has 1,655 km long canals for distributing water. The total length of the main canals is 193 km, of secondary canals 467 km, (total number 17) and of tertiary canals 995 km (total number 154). There are field channels with a total length of 2,770.70 km (total number 1,772). The G-K Project is also aimed at improving the overall drainage system of the area and there are 971-km long drainage canals for the purpose. The project has constructed 228-km long inspection roads which serve the project as well as the people in the area. Bridges and culverts have been constructed over different canals - 1,268 on irrigation canals, 653 on field channels and 253 on drainage canals. A total of 39 km dam has been constructed to keep the project area flood free. A total number of 1,402 personnel are engaged in this project of whom 57 are officers and technical experts while the other 1,345 are supporting and field staff.

During periods of low flow in the Ganges, the pumps deliver some 122 cusec, only 68% of the designed discharge of 180 cusec. In recent years, farmers in the area have turned to tubewells to augment supplies, although they revert to surface water whenever it is available.

The irrigation system is generally energised in mid-February and is shut down in mid-November. The system remains inoperative during the winter for annual maintenance. Using the G-K Project's irrigation facility, farmers are producing about 0.3 million tons of excess crops every year which is valued at about Tk 2,400 million. [Masud Hasan Chowdhury]

The G-K irrigation project recently brought four south western districts under cultivation due to introduction of a 'new season'. Farmers will now be able to cultivate their lands 3 times a year as GK project will ensure water supply. With the new initiative, about 3 lakh tones more rice are expected to be produced in about 1.16 lakh hectares under the project area. [Sanzida Murshed]