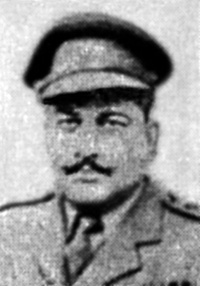 Gani, Major Abdul (1915-1957) an officer of the armed forces division was the organiser of the First East Bengal Regiment. Major Gani was born in Nagais village under Brahmmanpara upazilla of Comilla district on 1 December 1915. His father, Sharat Ali was a peasant. His mothers name was Jobeda Khatun. Abdul Gani got elementary education in a madrasa at Sidlai and the migrated to Chittagong for higher education in 1933. He was admitted to the Chittagong High Madrasa but he left the madrasa in July 1935 to get admission to the Khulna Zila School. He passed the Entrance Examinations in the following year from the same school. Abdul Gani was admitted to the Kolkata Islamia College in April 1936. He passed the Intermediate and Degree examinations in 1938 and 1940 respectively.

During his student life in Chittagong, Abdul Gani organised a voluntary group called ‘Sabuj Kurta Samiti’ (Green shirt organisation). The group used to participate in various social activities and as volunteers they supported many programmes initiated by the government. While studying in Kolkata he joined in the second battalion of the Kolkata University Training Corps under the Indian Territorial Forces. He took military training and participated in the annual exercise camps from October 1936 to November 1939. Abdul Gani was the group commander of Civic Guard, based at Beniapukur, Kolkata. Major Gani joined as an officer in the Bengal Fire Service on 20 May 1940 and later got posting in the kolkata Fire Brigade.

He had applied for joining in the army on 8 August 1941 and was selected by the Inter Services Board. In November he went to join in the Officers Training School, Banglaluru as a trainee-cadet. On 8 August 1972, Abdul Gani got emergency commission in the army as a second lieutenant and was subsequently transferred to the Indian Pioneer Corps. He became a Lieutenant on 10 December 1942 and a Captain on 18 September 1943. Abdul Gani was promoted to the rank of honorary Major on 3 December 1953. After getting commission, he was posted in the 64, Auxiliary Pioneer Battalion and discharged the responsibilities of Adjutant, Quarter Master and Company Commander. Finally he established the 1407 Pioneer Company and was appointed its commander. During the World War II, Abdul Gani fought in the Burma (Mianmar) front and was decorated with the Burma star and awarded war medal. After the partition in 1947, Major Gani refrained himself from the active service on health ground and then he was transferred to the newly created Pakistan National Guard.

During the World War II, two pioneers companies-1256 and 1407 were created with the bangali muslim soldiers. While forming the 1407 pioneer company at the Indian Pioneer Corps Centre at Jalna, Major Gani recruited competent Bangali muslim soldiers in this infantry unit as a part of his long-term plan to involve people of East Bengal in the army. He got support of Col. RR Moriarty in this regard. On the eve of partition he requested the Army Chief of Pakistan General Sir Frank Messervi to create a Bangali Infantry Palton comprising of the soldiers of two pioneer companies, dominated by Banglali muslims. General Messervi agreed to approve the proposal on 17 August 1947. As a result, two pioneer companies were assembled in Dhaka in September 1947. And from January 1948 Lt. Col. VJE Peterson started to organise the Infantry Battalion of East Bengal Regiment with the Bangali soldiers selected from those two companies.

The Army Headquarters assigned Major Gani to recruit jawans in the bangali' palton. So, he was made the Adjutant/the Quarter Master of the East Bengal Regiment Training Company. The first and the second battalion of the East Bengal Regiment were formed in 1948 and 1949 respectively at the initiative of Major Gani. He was made the Assistant Recruiting officer of the East Pakistan Recruiting Office in July 1949 and the Recruiting officer in 1951. During this period he visited all over the country to encourage the Bangali youths to join in the East Bengal Regiment and selected many of them. In March 1952, his service was placed again in the Pakistan National Guard and he served there up to July 1953. Major Gani retired from the service of the army on 4 December 1953. He used to play hockey, football, cricket, billiard and swimming. Major Gani also played a key role in setting up of Cadet Colleges in Bangladesh.

After retirement, Major Gani joined in politics and was elected a member of the provincial legislative assembly in 1954 as an independent candidate. He also took part in the World Veteran Soldiers Conference held in Frankfurt, Federal Republic of Germany in 1957. He died of cardiac arrest there on 12 November. The body of Major Gani was buried at the Mainamati Cantonment in Comilla. [Muhammad Lutful Haq]