Gari Gan Bangla songs originating in the elegiac literature of muharram. In commemoration of the sufferings and subsequent deaths of Hazrat Imam Hossain, grandson of the Prophet hazrat muhammad (Sm), and other members of his family, at Karbala, marsiya and jari gan are sung for the first ten days of Muharram. Jari Gan, however, includes other stories besides that of Karbala. Thus, along with Makkar Janmakatha, Jaharnama, Saddader Jari, Shah Jalaler Jari, Sohrab-Rustamer Jari, jari songs may also include social, religious, political subjects as well as natural calamities, riots, violence, family planning etc. 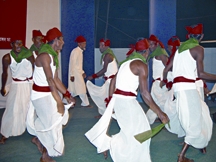 The origins of Jari Gan may be traced back to the early 17th century when poetry started being written on the tragic stories of Karbala. One of the earliest recorded poetry is Muhammad Khan's poem on Karbala titled Maktul Hussain (The Martyrdom of Hussain) in 1645, when Shi'ism had reached Bengal via Persia. The Muslim rulers of Bengal, even when they were not shi’ah , were patrons of Shi'ism. For example, shah shuja, the Mughal governor of Bengal, was a Sunni but his mother, Momtaz Begum, was a Shiah as were many of his amirs. All the nawabs in the early 18th century belonged to the Shiah sect. Over time, Muharram turned out to be one of the biggest festivals of Bengal.

It is possible that originally only marsiya (elegy or dirge) used to be sung, and that Jari Gan was a later addition. The marsiya is a short song lamenting the tragic fate of Imam Hossain and the members of his family at Karbala. The Jari Gan is a longer song and is rendered more elaborately by a bayati (lead singer). There is another type of performance rendered during Muharram, the dhuya gan, when an incident is narrated in a rhythmic tone. The story of Imam Hussain and his brave band of followers has tremendous emotional appeal to all segments of people and has made the Jari Gan popular in Bangladesh. Matam jari also refers to the poems of lament chanted on the occasion of Muharram, often accompanying penitential flagellation.

A typical Jari Gan is divided into three sections: a bandana (prologue), the body of the narration which consists of a tragic episode from the Karbala cycle, told in payar-couplets interspersed with spoken prose passages, and a concluding couplet saying that the recital has ended. Popular Jari Gans include Kasem-Sakhinar Jari, Hasan Hussain, Ma Fatemar Jari. Modern Jari Gans can be on a variety of subjects. A Jari Gan composed by Hatimuddin Sarkar, Sangsad Sadasya Marhum Nazrul Islam Sarkarer Akal Mrtyur Jari Gan, is on the untimely death of Nazrul Islam Sarkar, Member of Parliament. The poet ahmed sofa also used the form to compose Bangladesher Jari, using the traditional Jari Gan metre and format. The popularity of the Jari Gan was also used to compose songs to popularise family planning.

A Jari Gan session is led by a lead singer or bayati, supported by two to four dohars or assistant singers and occasionally at least four musicians. The bayati sings or chants part of the Jari Gan narrative, moving around and swaying his body to the rhythm of his singing with the dohars singing the refrain short songs. Most of the bayatis also play a musical instrument, dotara (two-stringed instrument), sarinda (one stringed instrument), violin, or dugdugi (a mini drum-like instrument). The musicians play on dholak (drum), ektara (one-stringed instrument), dotara, sarinda, violin, flute, ghubgur (type of bracelet with small bells), khanjani (small, hand-held metal instrument), harmonium etc.

Women too have their own Jari Gan teams. Women sing Jari Gan in the village of Austogram under kishoreganj district on the 11th and 12th of Muharram.