Garo, The an ethnic group in Bangladesh belonging to Bodo sub-sect of the Tibeti-Burman sect of Mongoloid race. They also live in Indian state of Meghalaya. The present population size of Garo in Bengladesh is 150,000. They live in the districts of Tangail, Jamalpur, Sherpur, Mymensingh, Netrakona, Sunamganj, Sylhet and Gazipur with a highest concentration in Haluaghat and Dhobaura upazilas of Mymensingh, Durgapur and Kalmakanda upazilas of Netrokona, Nalitabari and Jhenaigati upazilas of Sherpur and Madhupur upazila of Tangail district. 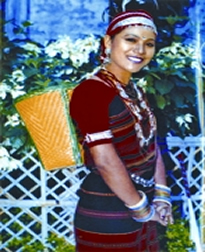 The antecedent home of the Garo is located in the Xinjiang province, north-west of China. They left that place several thousand years ago and migrated to Tibet. Then they moved again to the north-eastern Indian Hill tracts and Northern Bangladesh about 4500 years ago. And finally they migrated to the greater Mymensingh area and established a small feudal kingdom there.

The Garo society is matrilineal and mothers inherit property and they are the head of their respective families. Each husband or the father of children works as a manager of the family. The children assume the surname of their mother. According to the Garo customs, daughters inherit the family property. However, only the selected daughter, known as Nakna in Garo language enjoys that opportunity. Generally the youngest daughter of a family is selected as Nakna. At present, the male children are also given shares in the landed property through registered deeds in Garo society during the lifetime of their parents.

The entire Garo society is divided into 13 groups. These are Aoye, Abeng, Attong, Ruga, Chibok, Chisak, Doyal, Machchi, Kochchu, Atiagra, Matjangchi, Gara-ganching and Megham. In Bangladesh, most of the Garos belong to Abeng, Ruga, Attong, Megham and Chibok groups. Beside the 13 groups, the whole Garo community is divided into five major clans. These are; Sangma, Marak, Momin, Shira and Areng. The marriage institution of Garo is totally controlled by intercaste system. It prohibits intra-clan marriage. They love to be introduced themselves as Achik Monde (the soul of hill). They think that Garo is an objectionable and inferior word imposed by others to undermine their social status.

The staple food of Garo is rice. They take it with fish and meat curry, lentils and vegetables. Dried fish is their most favourite dish. The dried fish of puti species found in the bhati region including Gopalganj, Faridpur, Bhairab and Kishoreganj, is regarded as most delicious food. They are used to have excessive green chily in preparing curry. Garos like to have vegetables including brinjal, bottle-ground, sweat ground, pumpkin, curcurbitaceons, vegetables, chichinga, karola, jheenga and kidney beans. They also use to cook with soda water. But now-a-days a few of Garo families use soda water in cooking as most of their taste and recipe have also been changed. Garos have become habituated to cook and eat as their Bangali neighbours. Beside their traditional nakham vegetables, they have become fond of smashed and fried vegetables, pulse, fish and meat. Even the well off Garo families frequently take rich foods including hotchpotch, polao and biriani. However they are still very fond of having pork, turtle meat, eel and vegetables like bamboo shoots and mushroom.

Spirituous liquor, distilled by themselves, is an essential item to them for entertaining guests and festivities. However, it is not common to the Garo who are followers of protestant faith of Christianity. But the Catholics are very open to offer and enjoy local liquor as a part of their culture. They drink it after hard work for refreshment.

The dresses of Garo are now nearly similar to those of the Bangalis. Garo males wear lungi, genji, trousers and shirts. At present most of Garo males wear lungi. They were also used to attire extra large size colourful thin towel, gamchha like dhuti to cover the lower part of their body. The Garo women are used to dress up with sarees, blouse, peti-coat, salwar, kamij and orna. But Garo women wear their own traditional dresses at home.

These cloths, known as Dakbanda are designed with artistic paintings. During the British rule, Garo males became habituated to wear half-pant and shirt. Later they started to attire dhuti and shirt. Earlier, Garo women preferred to wear silver ornaments. But now, only the female members of well to do family wear ornaments, mainly of gold. However, all of them exchange wedding rings to fulfill the marriage ritual according to the Christian tradition.

Most Garos are now Christians in faith. They started to embrace Christianity by the end of the 19th century when the Christian missionaries came to their settlements. The members of Garo community had achieved a remarkable success in attaining higher literacy rate with the support of those missionaries. At present every Garo village has a primary school and the literacy rate is as high as 80%.

Earlier the Garos believed in animism. In the Garo's old-religion society only khamal or priests had knowledge about the existence of gods-goddesses and their role. The khamals play an important role in the society as they administer all sorts of social functions, find out the causes behind anybody's illness and through meditation he detects the god or the goddess who is not pleased to the patient. Then he gives remedy for relief. It was assumed that khamals get mantra, sacred hymns from gods and goddesses through meditation. Each and every specific hymn is recited in prayer to specific deity. Khamals are not appointed hereditarily. Anybody having knowledge and quality can be appointed as khamal. Generally an adult male having all the requisite quality, knowledge and god-gifted power is given that position.

Australian Bapstist missionaries initiated to preach Christianity among Garos in late 19th century. They established their mission in Birishiri village under Durgapur upazila of Netrokona district and achieved a significant success within a short period. On the other hand, the other sect of Christian faith, Raman Catholic sent their preaching mission to Ranikhong area of the same district in 1909. They also achieved a progress shortly as the new missionaries took up education and healthcare as their major fields of service among Garos besides preaching of Christianity. Now Garos in Bangladesh are mainly divided into two religious sections, Protestant (Baptist) and Roman Catholic. Of them Roman Catholics are majority. There are two other small streams of Christian Garos in Bangladesh, the Church of Bangladesh and the Sevenday Adventist. [Shuvash Jengcham]