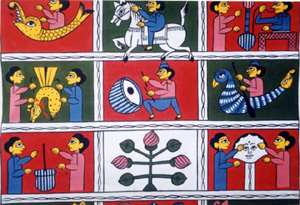 Gazir Pat a form of scroll painting; an important genre of folk art, practised by patuya (painters) in rural areas and depicting various incidents in the life of Gazi Pir. Until the recent past, the narration of the story of Gazi Pir with the help of a Gazir pat was a popular form of entertainment in rural areas, especially in greater Dhaka, Mymensingh, Sylhet, Comilla, Noakhali, Faridpur, Jessore, Khulna and Rajshahi. Those who took part in the performance were members of the bedey community and Muslim by faith. Besides Gazir pat, there were other scrolls depicting well-known stories such as Manasa Pat (based on the goddess manasa), Ramayana Pat (based on ramachandra), Krishva Pat (based on Lord krishna) etc. The asutosh museum of indian art (Kolkata, India), Gurusaday Dutt Museum (Kolkata, India) and the Museum of Folk Art and Crafts (sonargaon, Bangladesh) possess a large variety of scrolls.

A performance of gazir gan (songs about Gazi Pir) usually takes place in the courtyard of rural homesteads. The performer gradually unrolls the scroll, pointing to different illustrations with a thin bamboo staff as he narrates the incidents. A few percussionists stand beside the lead performer and accompany him on the judi, dhol and chati. The performance text is orally composed in rhymed metrical verse. Instead of a unified narrative, the text is essentially a mixture of three subjects: (i) description of the efficacy of the cult of Gazi Pir, (ii) comic moralising comments on social malpractices, and (iii) a list of the punishments that Yama, the god of the underworld, will mete out to people who lead immoral lives.

A Gazir pat is usually 4'8" long and 1'10" wide and made of thick cotton fabric. The entire scroll is divided into 25 panels. Of these, the central panel is about 12" high and 20.25" wide. There are four rows of panels above and three rows below the central panel. The bottom row contains three panels, each of which is 5.25" high and 6.25" wide.

Red and blue are the two pigments mainly used. There are slight variations of colour, with crimson and pink from red, and grey and sky-blue from blue. Every figure is flat and two-dimensional. In order to bring in variety, various abstract designs (such as diagonal, vertical and horizontal lines, and small circles) are often used. The figures lack grace and softness. Some of the forms such as trees, the Gazi's mace, the tasbih, (the Muslim rosary), birds, deer, hookahs etc, are extremely stylised. The figures of Gazi, Kalu, Manik Pir, Yama's messengers, etc appear rigid and lifeless. There is no attempt at realism.

The traditional method of painting Gazir pat begins with the preparation of size from tamarind seeds and wood-apple. The tamarind seeds are first roasted and left to soak overnight in water. In the morning the seeds are peeled, and the white kernels are ground and boiled with water into a paste. The paste is then sieved through a gamchha (indigenous towel). The tamarind size thus obtained is then mixed with fine brick powder. In order to prepare wood-apple size, a few green wood-apples are cut up and left to soak overnight in water. The resultant liquid is strained in the morning, and the size is ready to use.

A Gazir pat is generally painted on coarse cotton cloth. The piece on which the painting is to be executed is spread on a mat in the sun. A single coat of the mixture of tamarind size and brick powder is then applied on the side to be painted, either by hand or with a brush made of jute fibre. After it has dried, two coats of size are applied on the other side of the cloth, which is then left to dry. On the side to be painted, another coat of a mixture of tamarind size and chalk powder is applied. When the cloth is dry, it is divided into panels with the help of a mixture prepared with wood-apple size and chalk powder. When the prepared cloth is dry, the patuya starts painting the figures.

The pigments were originally obtained from various natural sources: black was obtained by holding an earthen plate over a burning torch, white from conch shells, red from sindur (vermilion powder), yellow from turmeric, dull yellow from gopimati (a type of yellowish clay), blue from indigo. The patuya would make the brush himself with sheep or goat hair. Some of these techniques are still used today. However, the patuya usually buys paints and brushes from the market.

The tradition of Gazir pat can be traced back to the 7th century, if not earlier. The panels on Yama's messengers and his mother appear to be linked to the ancient Yama-pat (performance with scroll painting of Yama). It is also possible that the scroll paintings of Bangladesh are linked to the traditional pictorial art of continental India of the pre-Buddhist and pre-Ajanta epochs, and of Tibet, Nepal, China and Japan of later times. [Shahnaj Husne Jahan]