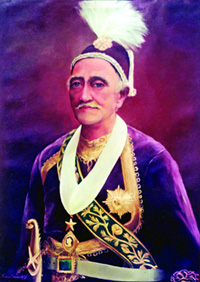 Ghani, Nawab Khwaja Abdul (1813-1896) businessman, zamindar, philanthropist, social worker and builder of the dhaka nawab estate. Born on 30 July 1813 at Begumbazar, Dhaka. Khwaja Abdul Ghani was the son of khwaja alimullah (d 1854) and Zinat Begum, who came to Dhaka originally from Kashmir via Uttar Pradesh in search of success, which Alimuallah achieved a great deal. Alongside business Alimullah bought a number of landed estates in early nineteenth century, when a newly created land market was in vigorous operation under the Regulations of the permanent settlement. Abdul Ghani's mother tongue was urdu, but he acquired proficiency in Bangla as well. He also Ghani learnt Arabic and Persian at home. One of the first batch students of Dhaka Collegiate School, Ghani was also proficient in English.

His father appointed Abdul Ghani the Mutawalli of all family properties by executing a waqfnama in 1846. Ghani brought further prosperity to his paternal property by buying new zamindari estates and expanding family businesses.  During the sepoy revolt of 1857, Khwaja Abdul Ghani rendered his support to the British keeping in view the security of the Dhaka city people. Then he was already the accredited leader of the city. After the revolt was over, he tried to persuade the British Army to give amnesty or at least minimize the punishment of the sepoys allegedly joining the revolt.He also donated a large amount of money to the Debt Fund established by the government for people’s welfare.

In view of Ghani's social commitment, he was made in 1861 an Honorary Magistrate. His credibility and skill in in conducting arbitration inspired people to come to him for settling disputes through arbitration instead of going to the expensive courts. He was made a member of the Bengal Legislative Assembly in 1866 and a member of the Governor General's Legislative Council in 1867. In 1869 he settled a violent xia-Sunni riot in Dhaka through arbitration.

The famous panchayet system of Dhaka owed a great deal to Abdul Ghani. As President of the Panchayet, he used to give a turban to the Panchayet leaders of different mahallas and maintained social order and peace through them. He was awarded the title of CM in 1871 and 'Nawab' in 1875. In 1876 the government granted him the privilege to maintain a seven Turuk Sawars (Turk Guard Regiment). In 1877 the title of Nawab was made hereditary. He was made a KC in 1886 and given the title of 'Nawab Bahadur' in 1892.

Khwaja Abdul Ghani was a member of the Dhaka Municipality from its inception. For the crippled and destitute he founded an asylum (Langarkhana) in Dhaka in 1866. At a cost of about 2.50 lakh rupees he set up a water supply plant for Dhaka city. He established educational institutions in several parts of his extensive zamindari.

Ghani made for the construction of Buckland Bund (dam), renovation of husaini dalan, construction of a road leading to the tomb of shah ali baghdadi and funded a Female Ward in the Mitford Hospital. He made large donations to victims of famine, flood and other natural calamities. Lady Dufferin Relief Fund received regular grants from him. He even donated to Russo-Turkish war (1877) Fund for the care of the wounded. Ghani was intensely a religious man. His charity even extended to the renovation of Nahr-i-Zubaida at Makka. Many people performed Hajj with his financial assistance.

An accomplished man, Nawab Abdul Ghani patronised poets and singers. He used to organise competitions among them on the occasions of muharram and other festivals. He patronized many poets, writers and singers. By supporting the cause of female artistes acting in theatres Abdul Ghani proved that he was liberal and free from prejudice. He was one of the proprietors of the Weekly Dhaka News, the first newspaper from Dhaka. The ahsan manzil Palace erected by him is an excellent testimony to the building art of the time.

He created gardens and parks such as Shahbagh garden, dilkusha garden, Company's garden etc, and thus contributed to the environmental development of Dhaka. He also founded a zoo at Shahbagh. On the occasion of the Christian New Year, agricultural and industrial fairs were organised in this venue. Abdul Ghani died on Monday 24 August 1896 at the Ahsan Manzil and lies buried at the family graveyard at Begumbazar in Dhaka. [Mohammad Alamgir]