Gharial one of the most primitive living crocodiles, Gavialis gangeticus, family Crocodylidae, class Reptilia. It is so-called because its head with snout is similar in appearance to that of a horse. 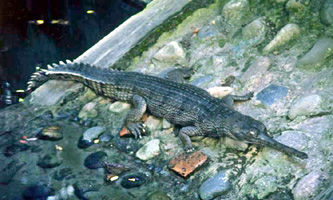 According to some, however, the name derives from the appearance of a large hollow cartilaginous octagonal protuberance on the end of its snout near the nasal cavity, resembling an earthen pot, or Ghara. The specific trival name is due to its presence in the river ganges.

Gharial is a shy and benign aquatic reptile measuring 4 to 7 m in length. This animal is distributed in the major rivers of Indian subcontinent. In Bangladesh it was once distributed in padma, jamuna, brahmaputra and their tributaries. However, the animal is now a very rare sight. Fossil forms have been described from Siwalik Hills and Narbodavalleys from Pliocene deposits. This group of animals have maintained their stature unaltered since their appearance in the Jurassic Era.

Long and slender snout is a very prominent feature of Gharial. The upper jaw houses about 50 small sharp teeth, while the lower jaw has about 48. The teeth are adapted to prey on common fishes and aquatic birds. Sometimes it seizes goats and dogs which visit the bank of rivers. Forty or more eggs are deposited on the bank of river in holes scooped out and afterwards covered by sand. The young appears in March-April and measures about 40 cm including the tail.

Unlike other crocodiles, Gharials spend little time basking on the land. Their limbs are not well adapted for walking on land like their cousins. Their forelimbs are conspicuously shorter and smaller than their hind limbs. All the five fingers are webbed and well-developed. The tail is robust and strong, and adapted for swimming.

The Hindus used to sacrifice Gharials to the god Vishnu. It was regarded as a very sacred animal and they would not slaughter them for other purposes. With the change of their outlook, people started to poach them for their armoured skin. Ladies bag, shoes, decoration pieces, etc made of Gharial skin fetch lucrative sums abroad. As a result, their population has declined at an alarming rate. The species is now listed as critically endangered in Bangladesh. [Md Sohrab Ali]