Administration Ghatail Thana was formed in 1961 and it was turned into an upazila in 1983.' 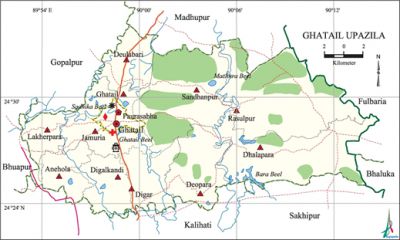 History of the War of Liberation During the war of liberation a Pakistan military cargo carrying arms and ammunitions was captured by the freedom fighters under the leadership of Habibur Rahman (Bir Bikram). In the battle that followed 25/30 members of the Pakistan army were killed. A total of 44 freedom fighters were killed in 9 major encounters and 31 minor encounters with the Pak army in the upazila.

Marks of the War of Liberation Memorial monument 1 (Kumarpara of Makrai).