Glass Sand A special type of sand that is suitable for glass making because of its high silica content, and its low content of iron oxide, chromium, cobalt and other colourants. The process of transportation and sedimentation of sand followed by concentration of quartz in significant volume along with the removal of other minerals leads to the accumulation of glass sand. In Bangladesh surface to near surface deposits of glass sands are found in Balijuri of Sherpur district, Shajibazar and Teliapara of Habiganj district, Chauddagram upazila of Comilla district and Dakshin Zangal of Hathazari upazila in Chittagong district. Here glass sands are identified in Recent piedmont alluvium. Sub-surface glass sands were found in Maddhyapara, Barapukuria and Dighipara of Dinajpur district and Khalaspir of Rangpur district. The sand contains about 88 to 99% of silica with a few percentages of iron, titanium, cobalt, and other materials. 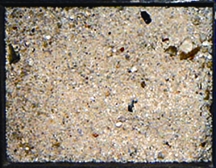 The Geological Survey of Pakistan (GSP) first discovered glass sands in 1960 at Balijuri Mouza of Sreebardi upazila in Sherpur district.The glass sands are deposited in 30 lenses of 0.15 to 2.13m thick. The reserve is 0.64 million ton in an area of 0.596 sq km. GSP conducted survey at Nayapara area of Habiganj district in 1970-71. Later on in 1972-73, and 1974-76 detail work on this was completed by geological survey of bangladesh (GSB).

Besides the surface deposits the glass sands are also found at subsurface of Lalghat-Lamakata at Tahirpur upazila of Sunamganj district near Bangladesh-India (Meghalaya) border at a depth of 23.78m to 72.95m below the surface in 1991. The sands are present in two layers of 1.22 to 1.83m thick (each). The reserve is 2.55 million ton upto the down dip of 164m of the layers. The subsurface deposit of glass sand at Maddhyapara was discovered in 1974 at the depth of 128m below the surface. It is present on the top of the Pre-Cambrian basement complex. The glass sand with clay layer is 5.2 to 16m thick and the average of sand layer is 4m thick. The reserves covering an area of 1.0 sq km are 17.25 million ton. The glass sand at Barapukuria was discovered in 1985 at a depth of 118m to 180m below the surface while drilling for coal in the basin. The average thickness of the sand is 21.90m and the reserves in an area of one square kilometre is 90 million ton. Besides these, subsurface deposits of glass sand was also found at Dighipara basin in 1994. The sands are present in 5 layers in this basin at a depth ranging from 62.19m to 325.30m below the surface. The total thickness of the 5 layers is 77.13m. The reserve is yet to be confirmed.

The glass sand at Chauddagram-Nayapara-Datteswar area are quarried and used in the Osmania Glass Sheet Factory at Chittagong. Since coal is being extracted from the Barapukuria Coalfield through underground mining method the glass sand deposit remains unexploited in this project.The sub-surface deposits at the Rangpur platform area may be utilised if there is any open cast mine for coal or hard rock in future in the area. [QM Arifur Rahman]