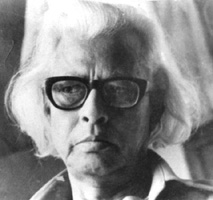 Habib, Ahsan (1917-1985) poet and journalist, was born on 2 February 1917 in the village of Shankarpasha in pirojpur district. After passing the Entrance examination in 1935 from Pirojpur Government School, he enrolled at the B M College, Barisal, but had to leave further education because of financial difficulties. Shortly afterwards, he moved to Kolkata, where, in 1937, he joined the Takbir as assistant editor. He subsequently worked in the Bulbul (1937-38) and the saogat (1939-43). From 1943 to 1948 he also worked as a staff artiste at the Kolkata centre of All India Radio.

After the partition of India in 1947, he left Kolkata for dhaka. In Dhaka, he worked with the Daily azad, Monthly mohammadi, Daily Krishak, Daily Ittehad, Weekly Prabaha, etc. He was also the production adviser of Franklin Publications from 1957 to 1964. From 1964 to 1985 he worked at the Dainik Pakistan/ Dainik Bangla.

Ahsan Habib started writing while a teenager. His first poem, ‘Mayer Kabar Pade Kishor’, was published in the school magazine in 1934 when he was student of class X. Subsequently, his poems were published in various journals and magazines such as Desh, Mohammadi, Bichitra, etc.

Though from village, Ahsan Habib became urban in language and habits, manners and sensibility. His poems reflect the social reality of his times and focus on the concerns of the middle class. He received several awards for his literary achievements, among them the UNESCO Literary Prize (1960-61), the Bangla Academy Award (1961), Adamjee Literary Prize (1964), Nasiruddin Gold Medal (1977), Ekushey Padak (1978), Abul Mansur Ahmed Memorial Prize (1980) and Abul Kalam Memorial Prize (1984). Ahsan Habib died in Dhaka on 10 July 1985. [Bimal Guha]