Habibullah, Khwaja (1895-1958) nawab of Dhaka, politician and social worker. Khwaja Habibullah was born on 26 April at the Dhaka Nawab House. Nawab Sir Khwaja salimullah was his father. As a young boy khawja Habibullah attended St. Paul School at Darjeeling and later was educated in England. 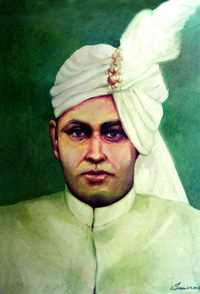 On his father's death in 1915 he, as the eldest son, assumed leadership of the family and got the 'Nawab' title. In 1918 he joined the Bangali Platoon (popularly known as bangali paltan) of the British Army and was sent to Mesopotamia as an honorary lieutenant. He was a member of Dhaka University Court, Dhaka District Board, Dhaka Municipality and president of the Dhaka Anjuman-i-Islamia. As chief of the panchiiyet of Dhaka he had extensive influence over the mahalla leaders. At the time of any communal riot Habibullah would form a peace committee taking members from both Hindu and Muslim communities and tackle the situation courageously.

Nawab Habibullah actively participated in the khilafat movement. He was made president of the first Dhaka Khilafat Committee on 20 December 1919 at ahsan manzilHe felicitated Maulana Shaukat Ali (1873-1938) and maulana abul kalam azad at Ahsan Manzil on 2 March 1920. He presided over the Khilafat Committee’s meeting held at Meerat (India) in the same month. Despite his support for the khilafat movement Habibullah was unwilling to oppose the British. He was also not in favour of boycotting educational institutions on the part of the Muslims in view of their backwardness in all respects. He was a member of the first central legislature as reformed under 1919 Act. He also represented Dhaka City to the Bengal Legislative Council from 1924 to 1932.

In order to ensure representation of various minority communities in the future government of India, the British government passed the Communal Award proposal in 1932. The hindu mahasabha opposed it but Khwaja Habibullah and Muslim leaders welcomed it. A conference of Muslims was held in Delhi on 24 March 1935 to support the Communal Award. Habibullah presided over this conference. He was president of Bengal Muslim League and a member of the Executive Committee of the All India muslim league. On 25 May 1936 the United Muslim League was formed in Calcutta under Nawab Habibullah's leadership. Later, it was amalgamated with the All India Muslim League. In 1936 he was nominated president of the Bengal Muslim League Parliamentary Board. He was a Minster in the cabinet of a.k. fazlul huq and held different portfolios from 1937 to 1941. He joined Huq's second Ministry disregarding the directives of the League high command and held the ministry of Agriculture, Industry and Commerce. Consequently, he remained suspended from the League for 5 years and returned to the party in 1946.

Habibullah contested for the Provincial Assembly in 1946 general election as an independent candidate from Dhaka Muslim constituency but suffered defeat at the hands of Muslim League candidate Khwaja Khairuddin. He also lost in the Brahmanbaria constituency. After the partition of 1947 he become vice-president of East Pakistan Muslim League and member of Muslim League's Central Executive Committee.

During his time the Dhaka Nawab Estate went under the control of the Court of Wards and the Nawab became a mere puppet. Even the waqf estate and private lands fell into mismanagement. Given to sensual pleasures, Habibullah took several wives and this was a matter of gossip in the society.

In his closing days he gave up politics due to broken health. He left his ancestral palace and resided in a house called 'Green House' in the Paribag area of Dhaka where he died on 21 November in 1958. The side of his father in Begum Bazar family graveyard buried him. [Mohammad Alamgir]