Heber, Reginald Bishop (1783-1826) christian missionary and a writer. Heber was born on 21 April 1783, in Cheshire, England. Heber was educated at Oxford and got awards for poems and prose also. He joined the Church in 1807. In 1815, the Bampton Lectureship of Oxford honoured him. In 1823, he gained the selection as Lord Bishop of Calcutta (whole of British India). 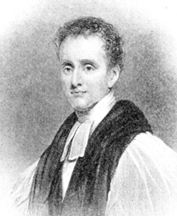 Bishop Heber was famous for his travelogues. It would be wrong to think that during his stay in India he was busy only with evangelical activities.

India attracted him with its diversity. From 1824 to 1826, he visited the churches under his jurisdiction and for this reason he had to travel from Calcutta to the Deccan. After his death, in 1827 the travelogue was published from London in two volumes entitled Narrative of a Journey Through the Upper Provinces of India from Calcutta to Bombay, 1824-1825 (with notes upon Ceylon); and An Account of a Journey to Madras and the Southern Provinces, 1826, and Letters Written in India. In the first volume, there is mention of his journey from Dhaka to Faridpur. In this part we get considerable information regarding the socio-economic condition of Bengal. The notable aspect of the book is the sketch of Heber.

As Bishop Heber recorded his experiences almost daily during his journey, we get a picture of India at that time. In some cases, the picture was very ordinary where he had narrated about the daily work schedule of the people.

Heber started his journey in 1824. He first came to Dhaka from Calcutta. His book contained an excellent description of Dhaka of that time. He met the then Naib-Nazim NawabShamsuddaul.He provided a detailed account of this meeting in his travelogue. He also met mir ashraf ali, a rich man and 'most aristocrat of the district'. Besides, there is detailed description regarding Faridpur and Chittagong.

Another important achievement of Heber was the establishment of 'Bishop's College' in Calcutta. Apart from travelogues, his mentionable works are: Palestine (1809), Europe (1809), Poems (1812), Hymns (1827); Bampton Lectures on the Personality and Office of the Christian Comforts (1816), The Omnipotence of God (1821), A Life of Bishop Jeremy Taylor (2 Voles, 1824). While travelling through Trichinopoly, he was attacked by epilepsy and died on 3 April 1826. [Muntassir Mamoon]