Hossain, Khondakar Delwar (1933-2011) lawyer, politician. He was born on 1 February 1933 at village Khirai Pachuria in Gheor upazila of Manikganj district. His father Khondakar Abdul Hamid was a noted alem and his mother was Aktara Khatoon. Khondakar Delwar Hossain passed Matriculation examination in 1947 from Manikganj High School, IA in 1949 from Manikganj Devendra College. He obtained BA (Hons) degree in Economics in 1952, MA in 1953, and got his LLB degree in 1955 from Dhaka University. While a student in the Dhaka University Khondakar Delwar took active part in the language movement in 1952. He actively participated in the election campaign in favour of the united front candidate in the East Bengal Provincial Assembly election in 1954. 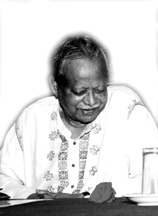 Khondakar Delwar Hossain began his career as a Professor of Economics in Sylhet Murari Chand College. Subsequently he took to legal profession and joined the Manikganj subdivisional bar. Khondakar Delwar began his political career as an activist of National Awami Party of Maulana abdul hamid khan bhasani in 1957.

In the presidential election in 1964, Delwar Hossain was the chief of the election monitoring committee in Manikganj subdivision in favour of the Combined Opposition Party (COP) candidate, Fatema Jinnah. In 1965, he was elected as president of Manikganj subdivisional unit of National Awami Party. As a member of the executive committee of coordination council of the lawyers’ associations he took part in the six-point movement in 1966. He had active role in the anti-Ayub Movement in 1969. He contested in the Pakistan National Assembly election in 1970 as a nominee of National Awami Party. He was an organiser of the War of Liberation in 1971 and took active part in the war. He was a member of the revolutionary Command council formed at Manikganj following the army crack down on 25 March 1971.

Khondakar Delwar Hossain joined Jatiyatabadi Ganatantrik Dal floated by President ziaur rahman in 1978, and was made convenor of the Manikganj district unit of the party. With the floating of bangladesh nationalist party (BNP) in 1979 Khondakar Delwar was elected as chairman of its Manikganj district unit. He was again elected as chairman of the unit in 1989. He had been a member of the National Standing Committee of BNP since 1985.

Khondakar Delwar Hossain was first elected a member of the Jatiya Sangsad in 1979 from Manikganj-1 constituency (Gheor-Daulatpur) as a nominee of Bangladesh Nationalist Party. He was elected a member of the Jatiya Sangsad from Manikganj-1 constituency in the Fifth (1991), Sixth (1996), Seventh (1996) and Eighth (2001) Sangsad as a nominee of BNP. He was the chief whip of the ruling parliamentary party in the Fifth, Sixth and Eighth Jatiya Sangsad, and chief whip of the opposition parliamentary party in the Seventh Sangsad. He was the president of the Parliament Members Club in two terms and was the president and member to various parliamentary committees.

Khondakar Delwar Hossain was associated with a number of socio-cultural and welfare organisations. He was the president of Manikganj Bar Association in 1976-1978 and 1984-1985 and a member of Dhaka University Senate in 1979-1981. Between 1979 and 1982 he was the senior vice president of the Board of Management of Bangladesh Cooperative Bank. He was the founder of Manikganj Khondakar Nurul Hossain Law Academy and was its principal. He established the Khondakar Delwar Hossain College and the Pachuria Madrasa at his native village. He has immense contribution towards the overall development of the upazilas of Gheor and Daulatpur.

Khondakar Delwar Hossain was honoured with the Ekushey Padak for his active participation in the Language Movement. He died on 16 March 2011 in Singapore while under medical treatment at Mount Elizabeth Hospital. [Muazzam Hussain Khan]