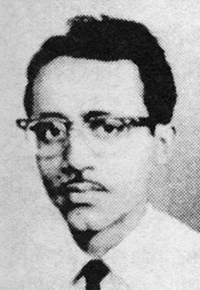 Hossain, Sirajuddin (1929-1971) journalist, war of liberation activist, martyr, was born on 1 March 1929 at Sharshuna village under Shalikha upazilla of magura district. He passed matriculation (1943) from Jhikargachha School, Intermediate of Arts (1945) from Jessore Madhusudan College and Bachelor of Arts (1947) from kolkata islamia colleg.

As a journalist Sirajuddin Hossain worked with the daily Azad in Kolkata and also in Dhaka until 1954.He joined the Franklin Publications in 1954. He also worked as News Editor of the ittefaq (1954-1966, 1969), Bureau Chief of the news agency PPI (1966- 1969), and Executive Editor of the Ittefaq (1970-1971).Sirajuddin Hossain was noted for his courage, straightforwardness and objectivity. He vehemently supported the six-point movement and later, the War of Liberation. His support to the war cost him his life.