Hossain, Syed Altaf (1923-1992) journalist, politician. He was born on 16 March 1923 at village Bistudia in Kushtia district. His father was Syed Yad Ali and mother Jarina Khatoon. Altaf Hossain passed Matriculation examination in 1939 from Hari Narayanpur School in Kushtia, IA examination in 1941 and BA in 1944 from Calcutta Islamia College. He obtained BL degree in 1946 and MA in History in 1947 from Calcutta University. 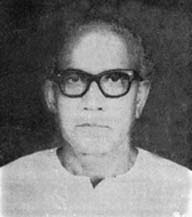 Syed Altaf Hossain was involved in journalism since his student life. He had been working in the news section of the Morning News in Kolkata since 1944. After the partition of India he came to Dhaka and joined the news section of Pakistan Observer in 1949. Besides he worked for some time in the Daily Ittehad. Between 1950 and 1953 he had been working in the editorial section of the Morning News in Dhaka. The New Nation was published from Dhaka in 1956 with Altaf Hossain as the editor.

Altaf Hossain got himself involved in politics right in his student life. He joined the Student Federation in Kolkata and was elected as president of the Islamia College unit of the Federation. He participated in the movement for removal of Howel Monument led by Netaji Subhas Chandra Bose in 1940. He joined the Awami Muslim League in 1953 and was elected a member of the East Bengal Provincial Assembly in 1954 as a nominee of the united front. After the promulgation of section 92A by the government on 30 May 1954 and the introduction of the Governor’s rule in the province, warrant was issued against Altaf Hossain. He was arrested in 1955 and was kept confined for some months. Warrant was again issued in 1955 against him for his alleged involvement with the police strike, and he went into hiding.

Altaf Hossain was elected a member of the central and provincial executive committee of the National Awami Party (NAP) floated in 1957 under the leadership of Maulana Abdul Hamid Khan Bhasani. After the promulgation of martial law in the country in 1958 warrant was issued against him, and he remained absconded for two years. Syed Altaf Hossain was elected as general secretary of the East Pakistan unit of the NAP in 1965. He was arrested in 1966, and while inside the jail he was elected as general secretary of the Pro-Mosco group of the NAP (1967), a faction of the party consequent upon the ideological conflict between China and Soviet Union. He was released from jail in 1968 under a verdict of the High Court, and was again arrested after some time within the year. He was however released on bail and joined the anti-Ayub mass movement. Altaf Hossain was again arrested in November 1968 and got released after the fall of Ayub Khan consequent upon the mass upsurge of 1969. Altaf Hossain contested in the 1970 election and was defeated.

During the War of Liberation in 1971 he had a vital role in executing the training programme of the NAP activists and was in charge of the 60 youth camps organised by NAP. Syed Altaf Hossain was a member of the central committee of Bangladesh Krishak-Sramik Awami League (BAKSAL) formed in 1975. He was the State Minister in the cabinet of Bangabandhu Sheikh Mujibur Rahman in charge of the Ministry of Railway, and was the State Minister in the cabinet of Khondakar Mostaq Ahmad in charge of the Ministry of Road Communication. He was the founding chairman of the Jatiya Ekata Party floated in 1978. Altaf Hossain was arrested in 1983 for his role in movement against military rule of Hossain Mohammad Ershad. Warrant was again issued against him in 1985 and he went into hiding. He was elected as convenor of the united NAP formed in 1986 consisting of the Jatiya Ekata Party and the two groups of the NAP.

Syed Altaf Hossain had vital role in the formation of the 15-Party Alliance for the restoration of democracy in the country and also in formulating the five points programme of the Alliance. He was elected a member of the Jatiya Sangsad in 1986 from Kushtia as a candidate of the 15-Party Alliance. Altaf Hossain was elected as president of the Ganatantri Party formed in 1990 by an amalgamation of the united NAP and Prajatantri Party and continued to hold the position till his death.

Syed Altaf Hossain was involved in legal profession as an advocate of the Supreme Court of Bangladesh. He had been the Vice Principal of Dhaka Law College for long years. He died in Dhaka on 12 November 1992. [ATM Zayed Hossain]