Hunter, Sir William Wilson (1840-1900) a member of the Indian Civil Service, a great statistician and compiler, an imperial historian, and a man of letters with a wide range of interests in race, religion, philology, diplomacy and journalism. 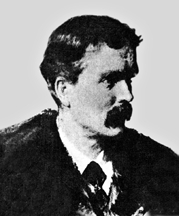 Hunter was born at Glasgow on 15 July 1840. Andrew Hunter, his father, was a manufacturer. The second of his parents' three sons, Hunter began his academic life in 1854 in the Quaker Seminary at Queenswood, Hampshire. After a profitable year at this school he joined the Glasgow Academy. He studied Chemistry, Logic, Latin, Greek, Mathematics, Moral Philosophy and Ethics in the University of Glasgow and obtained the degree of Bachelor of Arts in April 1860.

Hunter was attracted by the advantages of the Indian Civil Service. Hitherto the lucrative Indian posts were the close preserve of the scions of the east india company’s Directors and their friends. The introduction of the system of recruitment through competitive examination to the covenanted Indian posts threw open to the youths of the Empire the opportunity to try their luck. Hunter entered the Indian Civil Service in 1862 and opted for service in Bengal Presidency.

He reached Bengal in November 1862 and was appointed assistant magistrate and collector of Birbhum after he had passed the qualifying language examination in December 1863. From 1865 to 1868 he served in various capacities, such as superintendent of labour transport at Kushtia, inspector of schools and superintendent of stamps and stationery. Hunter's service was transferred to the Government of India in July 1869, and he was appointed compiler of the Bengal Gazetteer. Subsequently in January 1871, he became the compiler of the Gazetteer of India. From February 1871, he officiated as under-secretary to the Government of India in the home department. In the meantime the post of the Director-General of Statistics to the Government of India was created for him, and he joined it in September 1871. From 1875 to 1881 he spent more than half of every year in England for the purpose of compiling the statistical account of bengal and the Imperial Gazetteer of India.

On Hunter's return to India in December 1881, he was taken as an additional member of the Viceroy's Council. From February 1882 to November 1883 he was the President of the Education Committee which submitted a report to the Government. At the same time he also became Vice-chancellor of Calcutta University. In February 1886, he was appointed member of the Finance Committee, the last appointment of his service career. He resigned from the service in September 1887. In recognition of his meritorious services he was made Companion of the Indian Empire, Commander of the Star of India, and finally Knight Commander of the Star of India.

Hunter was a prolific writer on a variety of subjects. Anglo-Indian journalism afforded him a noble area to augment his income. His deputation for compiling a history of Birbhum district in March 1866 may be considered to be a turning point in his literary career. This helped him to tap unexplored sources, which, he thought, gave a new interpretation to Indian history. His first work, The Annals of Rural Bengal, Vol 1, was published in April 1868. He had planned to complete it in three volumes. The remaining two volumes were published later. His second work, A Comparative Dictionary of the Languages of India and High Asia with a Dissertation was published in November 1868. The Bengal Government paid him a hundred pounds and the Government of India made him a grant of two thousand pounds for his 'distinguished services'.

The prominent writer of the Annals and the Comparative Dictionary drew the attention of Lord mayo, the Viceroy, who took Hunter out of the Bengal service in 1869. He devoted twelve years to the gigantic task of compiling the Gazetteer of India During these fruitful years he published a number of edited volumes and other works, and above all, amassed huge source materials that were profitably used during the rest of his life.

Hunter's new work, A Guide to the Orthography of Indian Proper Names, with a list showing the true spelling of all post towns and villages in India was published in 1871. It standardized the spelling of Indian place names about which there had been much confusion. During the 1860s and early 1870s the so-called Wahabi disturbances provided a popular theme for Anglo-Indian writers, and as such Hunter anonymously wrote a few articles in the calcutta review and the Englishman analysing the nature of the Wahabi creed. This attracted the attention of the then Viceroy Lord Mayo, who requested Hunter to write a book explaining the grounds of the Muslim dissatisfaction in the subcontinent. The Indian Musalmans: Are they bound in conscience to rebel against the QueenFoodgrain was published in 1871 as the outcome of the request.

The remaining volumes of Hunter's Rural Annals appeared in 1872, entitled Orissa: the vicissitudes of an Indian province under Native and British Rule in two volumes. His Famine Aspects of Bengal Districts was published in 1873. He edited Wyllie's Essays on the External Policy of India, published in 1875. Lord Mayo's sudden death also provoked Hunter to vindicate Mayo's ideas and policy in the shape of a biography. It was published in two volumes in 1875 as The Earl of Mayo.

The results of the statistical survey of India were embodied in 128 volumes, of which Hunter himself contributed 22 volumes. The Statistical Account of Bengal was published in 20 volumes between 1875 and 1877. The Statistical Account of Assam was published in two volumes in 1879. The other 106 volumes of local gazetteers representing the districts of the remaining provinces of India appeared in 1880. Hunter's plan to condense the enormous mass of materials contained in 128 volumes of district gazetteers into the Imperial Gazetteer of India was going on apace.

Meanwhile, however, Hunter made time for another private publication entitled England's Work in India, published early in 1881. He completed the compilation of the Imperial Gazetteer of India in nine volumes in 1881. He gave the substance of the Imperial Gazetteer in various forms. He published a volume called Indian Empire: Its People, History and Products, and another named as A Brief History of the Indian People in 1882. He took a positive attitude towards the Ilbert Bill controversy. His speech on the Bill was published in 1883. During this time, he was also vigorously at work on the second edition of the Imperial Gazetteer. This was finally published between 1885 and 1887 in 14 volumes, incorporating the latest statistics and the results of the census of 1881.

The years intervening between Hunter's retirement (1887) and his death (1900) were extra-ordinarily productive. One of the first things that he did after retirement was to arrange with the Clarendon Press, Oxford, for the publication of a series of little volumes called The Rulers of India. This series consisted of 28 volumes. He opened it with a model memoir on the administration of Lord Dalhousie in 1890, and followed it up with Lord Mayo in 1891.

Besides being a great historian and organiser of research, Hunter also produced pure literary pieces. The Old Missionary (published in 1890) and The Thakerays in India and Some Calcutta Graves (published in 1897) fall to this category.

Hunter's School History and Geography of Northern India was published in 1891. It was followed in 1892 by his Bombay, 1885 to 1890, A Study in Indian Administration. His four volumes of Bengal Ms. Records with an Historical Dissertation on Land Tenure in Bengal were published in 1894. Another of his works, The Life of Brian Houghton Hodgson, British Resident at the Court of Nepal, was published in 1895.

Simultaneously with these publications, Hunter was bent on executing his plan to write a history of India, which he had formed long ago during his first years of service in Bengal. His original plan was to write a history of India from the earliest ages. But the loss by shipwreck of a mass of priceless manuscripts compelled him to reduce his canvas and he confined himself to tracing the growth of British dominion in India in five volumes. Only one volume of the History of British India appeared during his lifetime in March 1899. He left seven chapters of volume II in proof, and an eighth one in manuscript before he died on 7 February 1900. His able assistant PE Roberts posthumously published the book in November 1900.

Besides being a historian, he was also an ardent journalist, and contributed incessantly to the various journals of India. From 1888 to a week before his death, he wrote a weekly feature on 'Indian Affairs' in The Times. His principal articles in the Times were compiled in The India of the Queen and other Essays, published in 1903. Lady Hunter edited it and FH Skrine wrote its introduction.

The name of Hunter figures prominently among the Anglo-Indian administrators and historians. With a positivistic spirit he collected and consolidated for over thirty-four years the source materials for British Indian history in the archives of England, Portugal, Holland and India. As a result his researches have become useful depositories of information and knowledge for researchers of Indian history. Indeed, few have done more in spreading knowledge of India to the western world than Hunter. [Delwar Hussain]