Huque, Mohammad Azizul (1892-1947) lawyer, parliamentarian, social worker and writer, was born on 27 November 1892 in a Muslim family of Santipur, in Nadia district of West Bengal. His early upbringing was in a congenial family and community environment where the best of Hindu and Muslim culture co-existed. His hometown, Santipur, was a seat of Hindu culture and a centre of the Bengali language. He was well versed in Sanskrit, Persian, Urdu and English, apart from his mother tongue Bangla. 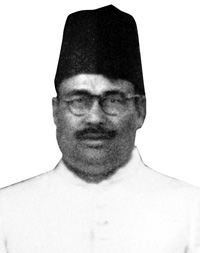 Azizul Huque passed the Entrance Examination from Santipur in 1907 and FA and BA examinations from the Presidency College, Calcutta in 1909 and 1911 respectively. Then he joined the University Law College and obtained the BL degree in 1914. He participated in the activities of the Muslim Institute and its programmes concerning the educational problems of the backward Muslim community and devoted much of his time and energy for the welfare of the toiling Muslim farmers. In 1912, while a law student and honorary secretary of the Muslim Institute, he wrote and published a pamphlet on Mohammedan Education.

Huque's sustained interest in the predicament of the Muslim students led to a paper read out at a meeting of the Muslim Institute presided over by WW Hornell, Director of Public Instruction of Bengal. The Director's encouragement and support resulted in its publication in 1917 in book form, History and Problems of Muslim Education in Bengal.

After his BL examination in 1914, Huque's guardians wished him to enter government service when he was offered the post of a deputy magistrate. This he declined and, instead, began practising as a lawyer in the district court of Krishnanagar from 1915. Here he settled down, and later that year married Keniz Khatun of Simlagrh in Hughli district.

He was actively connected with local government, social and educational institutions. Alarmed by the recommendations of the report of the Bengal Retrenchment Committee suggesting deprovincialisation of educational institutions, Azizul Huque wrote a pamphlet entitled Education and Retrenchment (1924) in which he made out a forceful case against the recommendations. He advocated incorporation of the madrasahs within the main educational framework. In 1926, he was appointed Government pleader and public prosecutor of Nadia and was elected Vice-Chairman of the District Board. The same year he was elected member of the Bengal Legislative Council and received the title of Khan Bahadur.

In 1928, he became a fellow of the Calcutta University and a member of the Dacca University Court. He became closely connected with the work of the Calcutta University. In 1929 he was re-elected to the Bengal Legislative Council. In 1931, Azizul Huque published a booklet entitled A Plea for Separate Electorate in Bengal, against the backdrop of the nehru report to focus attention on the Muslim viewpoint. His opinion was that adult franchise for a community with such a low level of education and political awareness restricted by property qualification and financial solvency would not lead to proportionate representation. At about this time he published another booklet entitled Cultural Contributions of Islam to Indian History.

The dependence of the Bengal farmers on the river system led to his study of the rivers of the region and the irrigation problems of farming. Since his election as a member of the Bengal Legislative Council in 1926, he had served on many select committees. He was closely connected with the passing of the bengal tenancy act of 1928, the Bengal Money Lenders Act of 1933, the Bengal Agricultural Debtors Act of 1935-1936 and the Bengal Tenancy Act of 1938. His continued interest in mitigating the plight of the Bengal peasantry led to the writing of his book The Man behind the Plough (1939). As stated in the preface, he attempted 'to lay bare the economic facts of rural life'.

Azizul Huque was Education Minister of Bengal from 1934 to 1937. At this time he was also in charge of Registration and Waqf. At his initiative a programme on primary education was launched. He was also instrumental in changing the medium of instruction in government schools from English to the vernacular.

Azizul Huque was the first speaker of the Legislative Assembly constituted by the 1937 general election under the new constitution and was conferred the title of CIE. He held the office for five years (1937 - 1942). He was appointed Vice-Chancellor of Calcutta University in 1938 and reappointed in 1940. He held these two positions simultaneously for four years. In 1940, he introduced Islamic History and Culture as a subject of post-graduate study in Calcutta University. His work on the Kamal Yar Jung Education Committee involved him from 1939 to 1941, studying the problems of Muslim education all over India including the Indian States. The report presented a broad-based scheme of education conducive to the culture and social order of the Indian Muslims.

He was knighted in 1941. Calcutta University conferred on him the title of D Litt (Honoris Causa). His appointment as High Commissioner for India in London in 1942 came at a critical juncture when Britain was experiencing intensive German bombardment. While in Britain he seized all opportunities to promote the cause of India's independence, refuting the British Government's claim that it was desirable to withhold sovereignty on grounds of Indian diversity and disunity.

On his return to India in 1943, he joined the Viceroy's Executive Council and was placed in charge of the portfolios of commerce, industries, civil supplies, food and later, the Textile Directorate under the Supply Department. He was member of the Executive Council under two Viceroys-Lord linlithgow and Lord wavell.

During 1945 he began writing a book on the life of the Prophet which, though completed, remained unpublished due to his sudden death. In 1946, he was awarded the title of knighthood of a higher order. After the formation of a caretaker government in 1946, Azizul Huque returned to Calcutta and enrolled himself as a lawyer in the Calcutta High Court. Following the riots in Calcutta of August 1946 the Central Government constituted an Enquiry Commission in which Azizul Huque was one of the counsels. In support of the protest call given by the Muslim League against the Viceroy's actions, Azizul Huque renounced all titles bestowed on him by the British Government. He died of cerebral haemorrhage on 23 March 1947. [Husniara Huq]