Husain, Abul Fazal Atwar (1918-1987) economist, National Professor (1987). Born on 21 August 1918 in noakhali town where his father was serving as a deputy magistrate. His father hailed from a respectable Muslim family of bogra. AFA Husain passed the Matriculation and Intermediate Examinations respectively from Noakhali Zila School and Dhaka College. He obtained first Class in BA Honours in Economics and Political Science from the University of Dhaka in 1938. 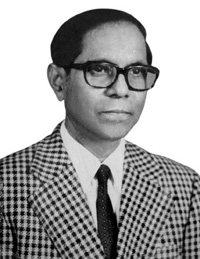 In the same year, he went to England on a state scholarship and got admitted to London School of Economics. He studied there till 1943 and did BSc and MSc in Economics. Between 1943 and 1948, he was an Extension Lecturer at the London University and worked in India House. The Partition of Bengal in 1947 induced him to return home. He joined Dhaka University and was the first teacher to be appointed as a Reader directly in the Department of Economics. In 1951, he married Rahmat Ara, who later became Principal of eden girls’ college and Provost of Roquiah Hall of Dhaka University.

In 1953, AFA Husain was appointed professor and head of the Department of Commerce, University of Dhaka. He demonstrated great abilities as a researcher. The first research study led by him was on the human and social impact of technological changes in Pakistan which was financed by UNESCO. The research report was published by the Oxford University Press and raised his image among scholars at home and abroad. Professor Husain was the team leader of several research studies published by the Bureau of Economic Research of the Dhaka University. Noteworthy among them are: Employment of Middle Class Muslim Women in Dhaka (1958); Rural Credit and Unemployment in East Pakistan (1959); Marketing of Jute in East Pakistan (1962); and Social Integration of Industrial Workers in Khulna (1965).

Professor Husain was an advisor to Study on Household Savings (1985) and of the series of background studies for the Third Five year Plan of Bangladesh. He wrote the chapter on Pakistan in the UNESCO publication titled The People of Savings and Wealth in Southern Asia and the West edited by Professor RD Lambert of Pennsylvania University and Professor BF Hoselitz of Chicago University.

Professor A F A Husain was appointed National Professor in 1987. But just after one week following this appointment, he died. He funded a ward in the Rotary Club Hospital at Dhaka in his father's name. Also his wife, Rahmat Ara established a fund in Dhaka University for a student scholarship and another one in asiatic society of bangladesh for patronising research. [M Habibullah]