Imambara literally means residence for the imam. Specially, the word stands for a house or an assembly hall built by the Shiites for observing muharram. Throughout the month of Muharram, the first month of the Muslim calendar, as well as on other occasions important to Shiites, assemblies (majlis) are held in the Imambara. On the occasion of the death anniversary of Hazrat Imam Hussain (R), the Tale of Karbala is told, marsiah or elegies are recited, ritual mourning and matom (beating the breast as a sign of mourning) is done.

At the early stage it was called 'Hosayniya' in the land of Iran, Iraq etc. Hosayniya had been built in the major cities of Baghdad, Aleppo, and Cairo by the end of tenth century, originally in the form of annexes to mosques. They served as the starting point for local Asura processions. There is no evidence of the building of Hosayniya in Persia before the Safavid period. In the early 17th century first Hosaynia was built near the Ispahan city. In the 1780's, the development of Muharram rituals led to an increase in the building of venues for them, usually called Takias, particularly in Caspian areas of Persia. The functions of Takias and Hosayniyas thus began to overlap. The 'Maaydan-e Bozorg' at Zavara near Ardestan, built under Aga Muhammad Khan and during the early years of Fath-Ali Shah's reign, is considered to be the first Hosayniya of the Qajar period. This Hosayniyas had both covered and open areas in order to enable the performance of Moharram ceremonies. In India, the most common equivalent term for a Hosayniya, and for a Takia as well, is Imambara. Sometimes also called, Asura-Khana and Aza-Khana. 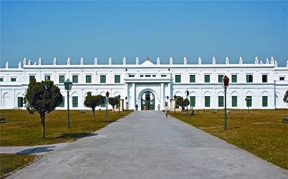 The Imambara is primarily an Indian institution that originated in the 18th century. Safdar Jung (1708-54) built a house at Delhi for the purpose of celebrating the Ashura, the tenth day of Muharram, but the building was not called Imambara. Asafuddaula, the grandson of Safdar Jung, also built a similar house at Lakhnau that became famous as Imambara-i-Asafi. The Imambara is also known as ashura khana in northern India. During the time of Nawab sirajuddaula, Sayed Ali Reza, a religious scholar came to Murshidabad from Nazaf, Iraq. After the death of nawab Sirajuddaula, the descendents of Ali Reza left Murshidabad for Dhaka and settled there. At that time the establishment of Imambara took place.

Haji Muhammad Mohsin inherited the zamindari of Syayadpur from his childless half-sister, Mannujan. Mohsin maintained the family tradition by holding the religious ceremonies and festivals in the most public and gorgeous manner. In consideration of the conservation of the Imambara and family tradition, Mohsin, himself being a celibate, made an endowment by executing a deed in 1806 under which the whole income of the zamindari was divided into nine equal shares. Three shares, according to the deed, were to be applied to the maintenance of the Imambara and its servants and for holding religious celebrations and festivals. The Mohsin Fund was taken over by the government in 1818 due to the utter mismanagement and embezzlement by the mutwallis or trustees. The government superintendent of the fund made a great surplus of the income of the estates, which was used in erecting new buildings for the Imambara in the 1850s. Some of the original buildings, which were built in the last decade of the 17th century, were however preserved. The Hughli Imambara with its magnificent new structures turned out to be the most famous tourist spot in the late nineteenth century. All the buildings and rooms, mosques and saraikhanas or inns were built with marble blocks, and the walls decorated with texts from the Holy Quran. With precious furniture, carvings, chandeliers, lanterns, the silver-plated pulpit in the exquisitely decorated mosque, and a well-staffed hospital and college the Imambara institution had assumed an exhilarating look from the 1860s. Now the Imambara, though not so well maintained as before, makes an attractive tourist spot in the State of West Bengal, India.

Nizamat Imambara or Hazarduary Imambara is situated in the northern face of Hazarduary palace, in Murshidabad. It is the largest in West Bengal (207 metres) and one of the largest in India. Previously the Imambara was made of wood, which was constructed by Sirajuddaula the nawab of Bengal, but a devastating fire destroyed it in 1846 AD.

Then this Imambara was again built by Nawab Nazim Mansur Ali Khan Feradun Jah, son of Nawab Humayun Jah, in 1847 AD spending nearly seven lakh rupees. Between the palace and the Imambara is as the smaller Madina mosque, sporting a colourful tiled verandah and with a replica of Prophet Muhammad's tomb at Madina. Each year the Imambara is opened for only ten days during the festival of Muharram.'

Imambara, Thakurgaon about 20 km to the southwest from the district town of Thakurgaon is the village of Sindurna (under Raipur union), where stands an Imambara in a rather unsatisfactory state of preservation. The Salbadi Mosque, in the eastern quarter of the village, lies about 200 yards to its south.

Two inscribed tablets, one in Bangla and the other in Persian, record its date of construction. The Bengali inscription is now placed on the wall of the nearby mud-built mosque, while the Persian one is now in the custody of a local inhabitant, Mr Hakimuddin Ahmed. The inscription in Bangla records the date of construction as 1215 BS and the Persian has the date as 1210 BS, but both mention the name of the builder as Shaikh Mohammad Raj, son of Shaikh Khairuddin and grandson of Shaikh Sadaruddin. Local tradition has it that they were descendants of Shaikh Chan, zamindar of Sitalpur in Purnia district.

What now exists of the Imambara is perhaps the gateway house and the main building has in all probability disappeared. It is a 6.10 m high rectangular building and measures 5.80 m' 3.95 m externally. There are two arched entrances in each of its eastern and western sides, while there is only one arched entrance each in its south and north sides. The arches are about 2.15 m high and 0.90 m wide. The walls are 0.90 m thick. The building has a chauchala hut type of roof, while the cornice is straight.

The building is in a very dilapidated condition with an overgrowth of vegetation on the roof. The structure is on a raised plinth. Scattered brickbats in the surrounding grounds testify to the existence of the main Imambara.' 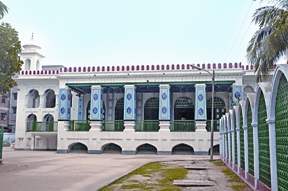 Husaini Dalan is the earliest Imambara in the Indian subcontinent as a whole complex. Mir Murad, the superintendent of the Nawara (Head of the fleet or boat) estates of Nizamat built the Husaini Dalan in the year 1642. At the time prince shah shuja was the subahdar of Bengal. It is situated in the southern part of the city of Dhaka about one kilometer from the river Buriganga. The road in the north of the boundary, the main entrance is called 'Husaini Dalan Road'. The south area is called 'Tahkhana'. The west is called 'Bakshi Bazar' and the east 'Nazimuddin Road'. The present area of Husaini Dalan is approximately 6.2 bighas (8453 sq. meters). The main building 'Husaini Dalan' is situated in the middle of complex, built on an area of about 0.65 Bigahs (88.05 sq. meters). In the south touching the building there is a pond. Opposite the main staircase in the east there was the tomb of Nawab Gaziuddin Haider having eight graves called 'Muqbara-e-Naiyeb Nazim'. Sometimes in 1985 the building of the Mukbara collapsed. Later only the boundary of the building has been built. The double storied building situated in the north at the main entrance is called 'Naobat Khana'. The meaning of Naobat is 'Drum' and it was beaten to inform people about the timing of 'Majlish' in Muharram. Other than there is a 'Ganj-E-Shahidan', and 'Kotwali Dalan' adjacent to the Naobat Khana, and a Gusal Khana (bathing place). After the death of Mir Murad, the Naib Najims of the then Dhaka took over the management of Husaini Dalan. In 1844, a new management committee started their activities under the leadership of khaja alimullah, the founder of the Nawab family. In 1891 Khaja ahasanullah took over the charges of Husaini Dalan Imambara as a sole administrator. During his period an earthquake occurred (1897 AD) and the north part of the building was partly damaged. Nawab Ahsanullah reconstructed the building. In the year 1959 AD the then Pakistan government appointed a management committee after the death of Nawab Ahsanullah. After the Independence, The Ministry of Home Affairs of Peoples Republic Bangladesh took the charge of the building.

Other Imambaras of Dhaka There were a few Imambaras in Dhaka, which shows that Muharram was observed quite significantly in these areas. One of the earliest Imambaras stood in the Farashganj area in the premises of Bibi ka Rowza, which was built by Amir Khan in 1600 AD. RM Doshanji later renovated this in 1861. There was another Imambara near Dhakeshwari Temple, Old Dhaka that was built around 1869. This was marked as the old Husaini Dalan. Another Imambara, named the Husaini Dalan of Meer Yakub was Near Fulbaria. Two more were in Choto Katra and Meer Mukim Katra. [Mohammad Shafiqullah, Sirajul Islam, Sania Sitara and Nasrin Akhter]