Indian Museum, Kolkata the earliest museum in the Asia Pacific region. Established on 2 February, 1814 at the cradle of the asiatic society, it underwent multi-linear phases of fruitful existence - the periods of germination, accumulation, consolidation and expansion. The Indian Museum that was earlier known as Asiatic Museum and subsequently as Imperial Museum thus grew into the largest institution of its kind in the subcontinent. 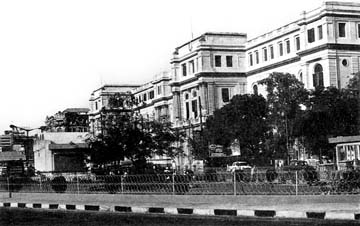 The foundation of the present Victorian edifice was laid in 1867 and completed in the year 1875, the architect being WL Granville. On 1 April 1878 the museum was thrown open to the public at the present building on Chowringhee Road overlooking the green maidan.

The Archaeology section includes pre and proto-history, Maurya, Shunga, Shatavahana, Gandhara, Kusana, Gupta, Pala-Sena, Chandela, Hoysala, Chola art galleries besides the minor antiquity collections through the ages. A modest collection of Egyptian antiquities including a mummy - its star attraction, is displayed in a special gallery. Inscriptions and manuscripts and seals in Sanskrit, Prakrit, Arabic, Persian, Urdu and Bengali as well as Indian coins of classical, mediaeval and modern times are also displayed in a few galleries.

The museum directorate has some co-ordinating service units such as Education, Presentation, Publication, Photography, Medical, Modelling, Library etc. These units by and large meet the growing demand of the museum and the visitors with regard to visual and printed information, making of replicas, treatment of museum objects, promotion of mass communication and educational programmes. Besides organising in-house lectures, seminars, exhibitions and other cultural events, the museum also promotes out-reach activities like, international, inter-state, mobile and travelling exhibitions. [Shyamalkanti Chakravarti]