Indian Ocean the third largest ocean having an area of 73,427,000 sq km, bounded by India, Pakistan and Iran on the north; Antarctica on the south; the Malay peninsula, the Sunda Islands of Indonesia and Australia on the east; and the Arabian peninsula and Africa on the west. It covers about 20% of the world's total ocean area. An arbitrary separation from the Pacific is made through the Malay Archipelago and between Australia and Antarctica and from the Atlantic by the expanse between Africa and Antarctica and by the Suez Canal. Its chief arms are the Arabian sea (with the Red sea, the Gulf of Aden and the Persian Gulf), the bay of bengal and the Andaman sea. 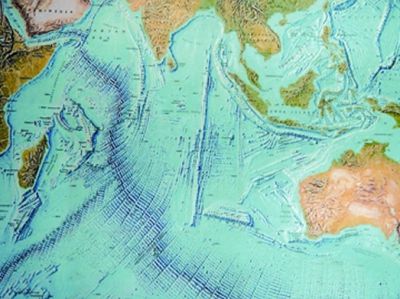 In the latter part of the 19th century information on the bottom topography of the Indian Ocean was first provided by expeditions of HMS 'Challenger' and the German 'Gazelle' and 'Valdivia', which was later modified by the expeditions of the 'Sealark' and many British cable ships. Beginning in 1929 extensive cruises were made by 'Discovery II' in the western part of the ocean. The oceanographic vessels 'Willebrord Snellius' and 'Dana II' worked in the open ocean and the 'Ammiraglio Magnaghi' in the Red Sea. In 1933-34 the 'Mabahiss' explored the northwestern part of the ocean, the Swedish 'Albatross' the equatorial regions in 1948 and the Danish 'Galathea' selected deeper waters in crossing from southern Africa to India to Indonesia in 1951. Currently Scripps Institution of Oceanography at the University of California at San Diego and Woodshole Oceanographic Institutions of the USA are actively working on the Indian Ocean.

Indian Ocean started forming during Mesozoic and Cenozoic times when Gondwanaland broke apart. However, at present it has a narrow continental shelf. A longitudinal ridge, the mid-Indian ridge (mid oceanic ridge), is continuous at depths around 3048m and extends from India to Antarctica, separating the Western Indian and Eastern Indian troughs. It is similar to Atlantic ridge but is much wider and does not extend so near to the surface. The greatest depth (7,725m) is in the Java trench, south of Java, Indonesia. The Indian Ocean receives few large rivers, the chief being the brahmaputra, the ganges, the Irrawaddy, the Indus, Zambezi, and the Shatt-al-Arab (formed by the junction of the Tigris and Euphrates).

Madagascar and Sri Lanka are the largest islands of the ocean and are structurally parts of the continents. The Laccadive, Maldive and Chagos islands rise from the central part of the Indian ridge and are low coral islands. The islands, which are extended from the Seychelles to Mauritius, are the westward extension of the Indian ridge. The Andaman islands, the Nicobar islands, the Seychelles and Kerguelen islands are exposed tops of submerged ridges. Mauritius and St Paul's are volcanic oceanic islands. The tropical part of the Indian Ocean contains coral reefs.

Globigerina ooze dominated the greater part of the Indian Ocean north of 50' south. On the other hand, at depth greater than 4877m, red clay carpeted the sea floor. In some of the deeper basins radiolarian ooze is common, while diatom ooze are also present around higher southern latitudes. Around Persian Gulf and tropical latitudes calcareous sediments are predominating and off the African coast glauconite rich sediments are abundant.

The Indian Ocean is featured by two types of water circulation system-a regular counterclockwise southern system (South equatorial current, Mozambique current, West wind drift, west Australian current) and a monsoon drift northern system. Over the northern part of the Indian Ocean the surface currents change with the monsoon. The southwest monsoon brings moisture from the ocean and causes heavy rainfall on the Indian subcontinent and Southeast Asia. No large amount of deep water is formed in the Indian ocean by sinking of surface water, but waters of the deep basins usually come from the south of Africa.

In the Indian ocean the surface water temperatures usually range from 20°C, 25°C, 27.5°C, 30°C and 2°C from the north of southern tropics, equatorial latitudes, in the eastern half, in the Red Sea-Persian Gulf and in the extreme south off Kerguelen islands respectively. The saltiest surface water is found in the Arabian sea and along a belt extending from southwest Australia to South Africa. In both regions the salinity exceeds 36 per mille. In the monsoon region west of Sumatra and throughout the Bay of Bengal, because of rainfall and the inflow of rivers, the salinity is diminished to 34 per mille. In the northern portions of the Red sea and the Persian gulf, on the other hand, the salinity is sometimes as high as 40 per mille. South of Kerguelen as far as the Antarctic shelf there is a uniform Antarctic water of salinity 33.7 per mille.

In the extreme southern part of the Indian Ocean, pack ice and icebergs from the Antarctic are encountered in all seasons. [Sifatul Quader Chowdhury]