Ivory Arts' The use of ivory in crafts began long before the Christian era, and, in India, dates back to the Indus Valley civilisation (2300-1750 BC). In 1920 excavations in Sind discovered animal figurines, women's hair ornaments, combs and buttons made of ivory. The region did not have a native elephant population, so it is surmised that ivory was acquired from elsewhere for the manufacture of these artefacts. Ivory female figurines and dolls dating from the 6th century BC have been discovered at Champanagar in Bihar. Many specimens of ivory and bone works from 500-200 BC have also been found at Nagra and Maheshwar.

An ivory statue from 600-200 BC has been found in Gujrat. Ivory works of the same period have also been found at Rupa in the Punjab. Stone inscriptions found at the ruins of Sanchi Stupa speak of trading in ivory crafts at Bidisha in the 1st century BC. During the Sung rule (1st century BC) ivory craftsmen were engaged to work on the gates of the stupas at Bharhut, Buddhgaya and Sanchi. Ivory artefacts dating from the Sung period meant for cosmetic use have also been found at Chandraketu Garh in West Bengal. Ivory crafts were also popular during the Kushan period, as suggested by the abundance of ivory artefacts found at Taxila and Begram. 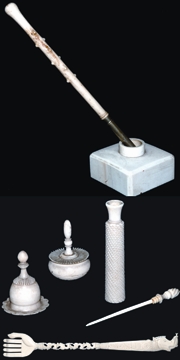 In Bangladesh the first evidence of ivory crafts has been found in sylhet. According to an 11th century brass plate found in the village of Bhatera in Sylhet, an ivory craftsman was engaged by the ruler of Sylhet to work at the stone temple at Bhatera. Other brass plates of his time also speak of ivory works. At the beginning of the Middle Ages, ivory crafts flourished in Orissa.

There the tusks of elephants were used mainly for making legs of thrones, furniture and temple decoration. Expert ivory craftsmen used to live in Sylhet and Idilpur, West Bengal. An ivory female figurine in the Prince of Wales Museum at Mumbai resembles a stone statue preserved at the varendra research museum, Rajshahi, and is believed to be from East Bengal.

The ivory craft underwent some changes after the advent of the Muslims. Ivory continued to be used to make furniture legs, but it was also used to make penholders, back scratchers, hookah parts. Butts of swords and daggers made of ivory were extremely popular. The Mughals greatly patronised this industry. Emperor jahangir mentions in his autobiography that he permanently employed a number of ivory craftsmen.

After the arrival of European traders in India in the 16th century, ivory craftsmanship came under the influence of western art. The British used to import elephant tusks from Africa to make different products with the help of Indian craftsmen for export to Europe. Tusks were also collected from dead elephants in the Indian jungles and from those maintained by the Indian princes and zamindars. During this time the craft flourished at Ludhial, Pali, Jaipur, Kerala, Mahishur, Assam and Bengal. The craft was not confined to any particular religious groups or castes. All classes of Hindus, including Brahmins, as well as Muslims were engaged in it. Apart from elephant tusks, tusks and bones of other animals such as hippopotamus, walrus, narwhal, dugong, hornbill and whale are used in ivory work.

The implements used for ivory work are almost similar to those used in carpentry. These include saws, sharp knives, sharpening devices, holders, scrapers, chiselling knives, small wooden hammers, hammers, lathes, and steel pens. The production methods of ivory are still primitive. The hollow part of the tusk is usually cleaned by boiling it with soda and calcium or by burying it underground for a few days. The crevices of the tusk are filled with liquid wax. A tusk is used only after it is hard and dry.

Elephant tusks are of two kinds: hard and soft. Hard tusks are bright and transparent and are difficult to saw. Soft tusks are easy to work with and do not crack. Before starting work, the artisan saws through a part of the tusk and then traces a design on it with a pencil. The engraving is done with the help of a chisel and a hammer. Delicate work is done with the help of a stone pen while the perforations are done with a drill machine. After the piece has been carved, it is soaked in water. The work is smoothened with the help of sandpaper, ivory dust, fish scales, china clay and chalk powder. In the South Indian State of Kerala, leaves of a tree are used to make the design smooth and bright.

Although ivory has its own lustre, craftsmen sometimes use colour. The craftspeople of Harappa used black and red. Egyptians soaked the tusks in red, yellow, violet, green or black dye. Some of the ivory artifacts preserved at the National Museum in Dhaka have been stained black.

Among the ivory works at the bangladesh national museum is a mat woven with fine ivory strips. Its borders have broad geometric designs made of silver strips. It was made to order at Sylhet for the dhaka nawab family for use at a wedding. It measures 230' 129 cm and was made in the 19th century. Also preserved at the National Museum are some ivory artefacts donated by the zamindar of Baldah. These are also believed to have been made in Sylhet. Among them are a small palanquin, clogs, a comb, animals, a throne, dice, and small elephants. With elephants on the endangered list and ivory banned, artisans in chittagong have been using fish and animal bones to make beads, hair pins, rings, combs, animal figures and bangles. These works resemble ivory products. [Zinat Mahrukh Banu]