Jackfruit Originally native to the Indian sub-continent, the jackfruit is now widely cultivated throughout the tropical low lands of both hemispheres. The tree bears one of the largest edible fruits known. The huge syncarps are always in demand and often bring high prices in the countries where the crop is planted. This is one of the many fruits which the small farmer or villager of tropical Asia, America or Africa can grow with little or no care thereby affording him a more varied diet as well as a source of income. Jackfruit is considered as the national fruit of Bangladesh. It is an important fruit crop in India, Bangladesh, Burma, Sri Lanka, Malaysia, Indonesia, Thailand, the Philippines and many other tropical countries. 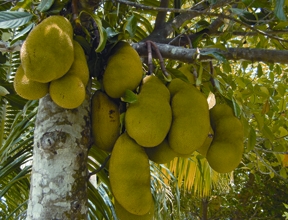 Acreage and production in Bangladesh The jackfruit ranks third in area under cultivation and second in production among the fruits of Bangladesh. There are 25,110 ha of land under jackfruit having an annual production of 469,500 tons (BBS, 2000-2007). It accounts about 22% of total fruit production in the country.

Use and composition Jackfruit is a popular fruit in Bangladesh. The pulp of the ripe fruit is eaten fresh and sometime it is preserved in syrup or dried. The juicy flesh around the seeds has normally a pungent odour and is sweet or acidic. The large seeds are boiled and roasted before use. They are used in many culinary preparation. The pulp of unripe fruits is used as a vegetable. The rind and leaves are fed to livestock. The tree may be used for beautification of the homesteads. The latex is used as sealing material. The yellow heart wood is a valuable timber and also produces a yellow dye.

A study on jackfruit of Bangladesh at BAU showed that there is wide variability in fruit characters among the jackfruit types. The average weight of different types of fruits and percentage of non-edible portion (rind and axis), edible portion (aril and seed) and eating quality differs to great extent. The edible portion ranges from 23.26% to 75.56%. Jackfruit is a nutritious food. The composition of the edible portion is given in the table 1.

Climate and soil The jackfruit thrives in the tropical low lands below an elevation of 1000m. A warm, wet climate is best. It flourishes in humid hill slopes even up to an elevation of 1500m but the quality of fruits deteriorates in higher altitudes. The tree will grow on almost any soil, but prefers a deep, well-drained loam soil. Drainage must be good, on the other hand, the soil moisture content must be kept at a high level. In the flood of 1988 in Bangladesh, a large number of jackfruit trees were severely injured or killed when mangoes and other trees under the same conditions remained unaffected. It was found that the jackfruit grows rapidly when planted in rich soil and under moist climatic conditions.

Varieties Being cross pollinated and mostly seed propagated, the jackfruit has innumerable types or forms considering the fruit characteristics differing in density of spikes on the rind, bearing; size, shape, quality of fruit and period of maturity. There are variations in sweetness, acidity and taste of jackfruit aril. In India some types available under various local names, such as 'Gulabi' (rose-scented), 'Champa' (flavour like that of 'Champak'), 'Hazari' (bearing large number of fruits). However, distinct varieties are not available in India or Bangladesh. BAU has established an orchard of 84 jackfruit germplasm, of which 45 were studied in detail and 21 germplasm were identified as superior ones. Generally Bangladesh jackfruits are of three types namely i) Khaja-hard pericarb, ii) Gala- the pulp is very juicy and soft and iii) Dorosa an intermediate one, the pulp of which is fairly firm and juicy.

Sexual propagation Propagation by seed is the common practice of multiplication in Bangladesh. This method is considered the cheapest, easiest and most convenient. Seeds are extracted from a ripe fruit of a desired plant and then planted directly in the field or in nurseries. Seeds lose their viability rapidly if stored more than 15 days. Fresh seeds germinate up to 90% while at 15 days of storage it is reduced to 78% and at 30 days 30%. After extraction whether the seeds are thoroughly washed to remove their slimy coating or retain as they are before planting, does not make any difference in germination. To hasten germination, the seeds should be laid flat with their embryo (hilum part) facing down. In the nursery, seeds are planted in beds or in poly bags. The seedlings raised from seedbed should be potted at the 4 or 5 leaf stage, since old and larger seedlings are hard to transplant without injuring the long, fragile tap root.

Vegetative propagation Plants raised from jackfruit seeds are not always found true-to-type to the outstanding mother plant. To perpetuate selected varieties/clones, vegetative propagation is essential. A number of vegetative methods have been attempted by different workers. It can be done by cutting, air layering, grafting or budding. Contact grafting and epicotyl grafting are found to be most promising method. Both the methods are found to have more than 80% success at BAU.

Micro-propagation or tissue culture technique 'The technique has been tried in India and Bangladesh with success. But some question remains about their survivality in the field and its normal establishment.

Layout and Manuring Land preparation depends on the type of site and the condition of land. It may be homestead areas for small scale planting or hilly areas when holes large enough to accommodate the ball of soil that remains with the planting material, are dug. For commercial plantation, site should be cleared and properly leveled and ploughed to attain a desirable tilth. The plot is laid out in square or hexagonal system with a planting distance of 10-12 m. A dose of well rotten cow dung or compost 30 kg, mustard oilcake 2 kg, TSP 500 g, MOP 250 g are mixed with soil in the pit. The pits are 60-90 cm in diameter and 60 cm in depth.

Planting Generally seedling or graft of 9-12 months old is planted in the field. Leafy branches or extra shoots are pruned before planting to prevent excessive transpiration. Best time of planting in Bangladesh is late April and May, and planting in June to August (rainy season) is unsuitable for most regions of the country.'

Irrigation and drainage Jackfruit is sensitive to both drought and water logging conditions. The plants should be irrigated regularly in dry periods and there should be improved drainage during rains.

Manuring of aged plants (approx 12 years old and above) It is essential to apply fertilizer in the jackfruit orchard in order to obtain a good crop. A dose of FYM 75 kg, N 690 g, P 150 g, K 175 g, S 30 g, per plant may be applied in two instalments in a year before and after the monsoon.

Pruning Pruning is done in August to September when harvesting is over. Only small and crowded branches are pruned. It is also done at the young stage of the plant in order to provide a strong frame work. 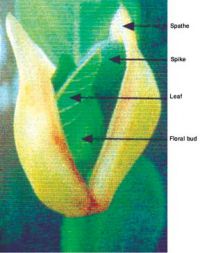 The dropping of the spikes and misshapen or irregular shaped fruits are the problem of jackfruit production in Bangladesh (Fig-3). It is mainly due to a lack of pollination or uneven pollination and fertilization, and unavailability of viable pollen grains. As the fruit is monoecious, the fruit setting requires the transfer of the pollen from the male spike to the female, and for this reason proximity to the two kinds of spikes is desirable. An increased percentage of fruit setting by artificial hand pollination (100%) over natural pollination (80%) was found at BAU. The fruits in the former were even or regular in shape and had increased weight.

Harvesting The multiple fruit or syncarp as it is known technically, consists of a greatly enlarged fleshy peduncle and numerous carpels which have fused together, with the exterior covered by a more or less thick rind. The juicy pulp and the pericarp around the large seeds are the edible potion. The jackfruit flowers in December-March and fruit ripens in May-August. The plant starts bearing at 5-8 years of age. The yield is not similar every year. Some trees produce a heavy crop in one year followed by much less production in the next year. Normally, a tree of 15-20 years old bears anything from a few to about 200 fruits annually. Weight of fruits varies widely among the types. Individually, fruits may weigh from a few kilograms to about 15-20 kg and in some cases may even be up to 30-45 kg. [Azizul Haque]