Jagannath Hindu god, lord of the universe, and presiding deity of Puri. His worship has been traced back to Buddhist, Jain, Vedic and Brahminical sources. In praise of Jagannath, a rathayatra, or chariot festival, is held in the month of Asadha (June), when hundreds of devotees join together to draw the chariot as an act of piety. 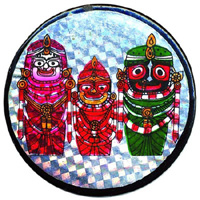 Jagannatha is also called ‘Darubrahma’, the prime soul enshrined in wood. He is also popularly known as ‘Chakadola’, or the round-eyed. The eyes of Jagannath are circular in shape. These round eyes have been interpreted as being the sun and the moon. Jagannath is often worshipped along with the deities Balabhadra and Subhadra, who have been variously described as Buddhist deities and as incarnations of shiva and Bhuvaneshwari.

As the residence of Jagannath, Puri is considered one of the principal holy places of Hinduism. Every year, countless Bengali Hindus from Bangladesh and west bengal go to Puri to worship Jagannath. Jagannath is also worshipped at Dhamrai in Bangladesh, where a month-long fair is held on the occasion of Rathayatra. [S Ranganath]