Jaintapur is famous for its megalithic remains. It is located 40 kilometres north of Sylhet divisional town and at the foot of the Jaintia Hills. A large number of hills, mounds and valleys are seen in the northern and eastern sides of the region while its western and southern parts are low-lying plain land covered with plenty of lakes (locally known as Haors). During ancient times the present plain land was probably underwater and part of a water body which might have separated Jaintapur from Sylhet. 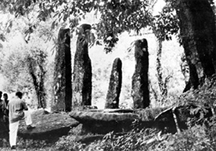 Due to its geophysical condition the region remained independent for a long time and was well known as Jaintapur Kingdom. As such it was mentioned in Epic, Puranic, and Tantric literatures. However, a number of local legends, folk tales, and inscriptions suggest that from approximately the 7th/8th century AD Jaintapur came under the control of Kamarupa Kingdom and that later it went under the control of the Chandra and Varman rulers. After the fall of the Varmans, Jaintapur was again ruled for some time by the Deva dynasty.

Jayanta Ray, the last ruler of the Deva dynasty, had a daughter named Jayanti, who got married to a son of a Khasi chief, named Landowar. Due to this matrimonial alliance, Jaintapur kingdom went under the control of the Khasis in c 1500 AD. Subsequently, Khasi kings ruled over the kingdom independently till the British occupied it in 1835.

The cultural remains of Jaintapur consist of the dilapidated Rajbadi or King’s palace, Jainteshvari temple, and megalith ie monuments.

The palace, which was built by the Jainta King Laxmi Sinha (1670-1701) in 1602 Shaka/1680 AD, is now completely ruined. The superstructure of the Jaintesvari temple is also badly damaged. Though the enclosure wall of the temple complex is in a better state of preservation, it has been crudely ornamented with plastered relief, representing horses, lions and winged semi-divine beings.

Nevertheless among the cultural remains of Jaintapur are a few megalithic monuments that are worthy of mention. Megalithic structures are defined as graves or commemorative monuments made by large and small stone chunks. These structures can be seen throughout Asia, Africa and Europe. In different parts of the Indian subcontinent these are present in large numbers and their form and spatial distribution have proved extremely valuable in the re-construction of past cultures, especially after the beginning of the Iron age in India. The only megalithic remains discovered so far in Bangladesh are the ones in Jaintapur.

The formal characteristics of these structures more or less resemble the structures still existent in other parts of India. Mainly two classes of megaliths-menhirs and dolmens-exist at Jaintapur. Menhirs are high vertical stone structures and are without any definite size and shape. Stone slabs placed horizontally to the surface upon two or more stone legs are called dolmens. In all, there are 25 menhirs and 32 dolmens in Jaintapur. Of the 32 dolmens 11 are still undamaged. These megalithic structures could be classified according to their spatial distribution in the following manner:

Jaintesvari Temple Series The structures included in this series are situated in front of the Jaintesvari temple near Jaintapur bus stop on the Sylhet-Jaflong highway. Three categories of structures have been identified within this series: (a) The Megaliths standing closely by the side of the temple are 9 menhirs and 10 dolmens. The mean height of the menhirs is 2.4m. The largest of the dolmens is 3.5m long and 2.62m wide; (b) The structures of this series are located close to the Shaheed Minar by the Jaintesvari temple. The mean height of the 8 menhirs is 2.67m. The extant numbers of the dolmens are impossible to determine as they are in a very fragmentary condition; (c) The 3 menhirs and 2 dolmens standing at the southern edge of the highway facing the temple form the third series. The biggest of the menhirs is 1.60m in height. One of the dolmens is heavily damaged and measures 4m' 3.8m. The other one is the largest of the Jaintapur megaliths. It is 6.5 metres in length and 5.2 metres in width and it lies horizontally to the surface on 9 legs.

Changil or Moktarpur series is located approximately 1.5 km northwest of the temple on the north bank of the river Nayagang. Although there were 4 menhirs in 1948 and 7 dolmens in 1960, now their numbers have been reduced to 3 and 4 respectively. The two undamaged menhirs are 4.58m and 4.55m in height and one of them bears a curved trixula (trident) symbol on its upper part. The dolmens are very fragmented and this makes measuring them impossible. They rest parallel to the surface upon 4/5 legs.

Khasi Village or Madhuban Residential area series are placed in a Khasi village, 1 km away towards the southeast of the temple where there are 2 menhirs and 2 dolmens. The eastern menhir is collapsed and measures 2.40m in height and the height of the western menhir is 3.50m. Both of them bear in relief a padma (lotus) in the lower part and, chakra (disc) and trixul (trident) respectively on the upper part. Of the dolmens the eastern one is semi-rectangular (1.65m' 1.10m) and the western one is semi-square (1.60m' 1.55m). Each one lies on 4 vertical legs. They have incised line drawings on their upper surface and semi-circular edges.

The pattern of the positioning of Jaintapur menhir and dolmens signifies close proximity to each other, but there is no visible regularity in their positioning. For example, menhirs are placed in the north of the dolmens in one series, in the south or in the east in the others. The menhirs are usually quadrangular upward tapering pillars of sandstones, although some have quadrangular tops. The highest of the menhirs is 4.58 metres (Changil series) and the lowest one is 0.50 metres (Jainteshvari temple series) and their width vary between 0.40 and 0.30 metres. The smallest dolmen measures 1.65m' 1.10m. The shape of the 11 undamaged dolmen varies quite considerably.

Eight of them are semi-rectangular, two are semi-square, and one is circular. Although all of them lies horizontally to the surface, their height was achieved by placing them on short pillars or legs, numbers of which varies - they can be 3, 4, 5 or even 9, although 4 legs dolmens is the most common. Except the legs of the dolmen of the Jaintesvari temple series, all the stone legs are unpolished and irregular in shape. The polished legs of the dolmen of Jainteshvari temple are circular and have projected band decoration. The upper surface of the dolmen slabs are supposed to have incised line-diagrams for games played by the children according to local oral history. If they had such diagrams, they would have suggested the re-use pattern for later periods.

While precise dating of the Jaintapur megaliths is not possible, it must be said that there has been no excavation to provide evidence for scientifically determined dates. Archaeologists have demonstrated that Northeast Indian megalithic cultures are closely linked with Southeast Asian megaliths and these were diffused through the migration of the Austro-Asiatic races. This migration sequence suggests that Khasis migrated to this part during the late neolithic period. The only C-14 date, which can be derived from the Markodola site of the Khasia hill, is 1296+ 100 BC for the post-neolithic period. The beginning of megalithic practice at Jaintapur, in this way, might be thought to be contemporary to this phase or a little later. [MM Hoque]