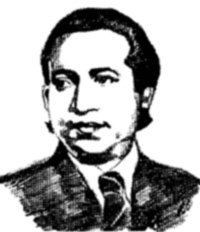 Jamil, Gauhar (1925-1980) dancer and dance director, was born in the village of Sirajdikhan in Bikrampur in a Hindu family. His given name was Ganesh Nath, but he assumed the name Gauhar Jamil after marrying a Muslim girl named rawshan.

On 21 September 1980 he succumbed to injuries received in a road accident. [Laila Hasan]