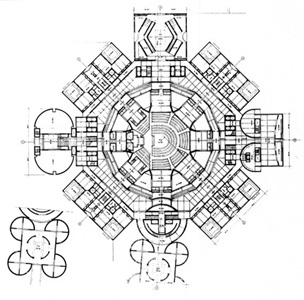 He came to prominence after designing Richards Medical Laboratories, Philadelphia. His other distinctive works include Philips Exeter Academy Library, Bryn Mawr Dormitories, Yale Art Gallery, Salk Institute, Kimble Art Museum, Management Centre at Ahmedabad, India, Family Planning Centre, Nepal etc. His biggest as also the best work is considered to be the Jatiya Sangsad complex. After the death of Luis I Kahn, his junior Henry Wilcot completed the revised design of the complex. Hery M Pambam made the structural design. The building is indeed a marvel of synthesis of ideas and engineering.

The decision to construct Jatiya Sangsad Complex at Dhaka was originally taken in 1959. The then Martial Law Administration planned to build the present Sangsad Bhaban as the second seat of the National Assembly of Pakistan in the proposed second capital area, which was designated as Sher-e-Bangla Nagar. Louis I Kahn was initially selected for designing the Jatiya Sangsad complex. He was not commissioned out-right but was asked to present a preliminary ideas and outline for the complex, and eventually in March 1962 he was formally commissioned for the job. A sprawling area of 208 acres of land to the north of present Manik Mia Avenue was acquired in 1961 for the project of the second capital and the master plan was ready in 1962.

The construction started in 1964 with an initial estimated cost of about $15 million. The construction of the complex along with all services and facilities was completed in 1982 at a revised cost of $32 million. The complex includes the Jatiya Sangsad Bhaban, hostels for members of Parliament, ministers and secretaries, hospitality halls and community buildings all linked by roads and walkways and surrounded by attractive gardens and lakes.

The changes in the original master plan mainly involved location of Supreme Court, a Grand Mosque and the President's House. Efforts were made to make the palace as inconspicuous as possible and these were moved away from the axis of the assembly building. The president's House (to-day's Gana Bhavan, the official residence of the Prime Minister), was one of the first structures to be built. The design of the Assembly building was completed in 1964 and construction work started immediately. The main structure was under construction at the time of the liberation war in 1971, when all further work stopped. In 1974 the Government of Bangladesh decided to complete the building without much change.

The main characteristic of the Jatiya Sangsad Bhaban is its monumentality. The mass of concrete lined with marble strips, the outer wall punctuated by pure geometrical openings and the dominating circular and rectangular concrete masses impart a supreme monumentality to the building quite suited to its noble functions. At the dead centre of the building is the main hall where MPs sit and the sessions of the Jatiya Sangsad are held. The plan is concentric; various layers of functions are situated around the main hall. A seven-storied high ambulatory, with light coming from the roof, surrounds the assembly hall like a circumambulatory path around a deity. There are four identical office blocks along four arms with other functions on four corners. There is also an elaborate circulation system with series of different types of stairs. The plan is essentially a square manipulated into an octagon. There are nine levels with horizontal connections in three floors only. The height of the structure is 49.68m (163 ft) above the ground. 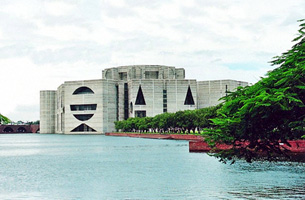 The main building complex consists of nine individual blocks, of which eight at its periphery rise to a height of 110 feet, while the octagonal block at the centre shoots up to 155 feet. The central block accommodates the Assembly chamber with a capacity of 354 seats for members of the Sangsad. The entire complex has a floor area of 823,000 square feet in the main building, 223,000 square feet in the South Plaza and 65,000 square feet in the North Plaza. The formal entrance through the south plaza gradually rises to a height of 20 feet and 6 inches in a broad flight of stairs. The basement accommodates a parking area, offices of maintenance agencies and service installations for the main building. The building has a water body of artificial lake touching its walls on all sides, and the North and the South plaza tie it to the site. From a distance, the edifice appears as if it rose out of water. The approach to the Sangsad Bhaban is through the grand plaza on the south and through the Presidential Square from the north with gardens of green grass and eucalyptus trees. The northern approach has an amphitheatre where state functions are held. Further north across the North Plaza there is a road by the side of the Crescent Lake.

There is not a single column in the whole building. Hollow columns that are parts of space enclosures have been adapted as structural supports. It is more like a concrete mass carefully carved and sculptured into a superbly functional entity. The construction material used is concrete and cast concrete forms both interior and exterior surfaces. Use of light and the unique way of bringing light to public spaces is an interesting element of Kahn's design. Light from the roof illuminate different spaces as if ambient glows are showered from heaven.

One of the important considerations in designing the Jatiya Sangsad Bhaban was protection from the sun and rain, while admitting free circulation of air achieved by providing huge geometric openings at the outer facade in the form of triangles, rectangles, full and segmented circles and flat arches. The structure provides a visual impression of a majestic edifice. It avoided conventional method of placing windows in the exterior and the disadvantages of monumental composition were removed by provision of core walls with small gaps in between. Architecturally, the complex marks a distinct departure from the rest of modern buildings in Dhaka.

The main criticism of the building is its exorbitant construction and maintenance cost. The total cost of the complex with a floor space of 6,27,833 square feet (Sangsad Building, 3.44 acres; North Plaza, 1.46 acres; South Plaza 4.98 acres and residential buildings, hostels, gardens, roads, lakes etc) was TK. 128.00 crores (1280 million). There are 50 staircases, 340 toilets, 1635 doors, 335 windows, 300 partitions, 35,850 sft glass shutter, 58,500 sft wooden shutter, 1,33,500 cft wooden panels in the building. The annual maintenance and operational expenses of the building is about five and a half crores (55 million) taka. The top floor or Level-10 of the building is used for different machinery.

The Jatiya Sangsad building has been discussed and referred to in almost all architectural publications in all parts of the world. It was also awarded the Aga Khan Award for Architecture. The following citation text published at the time of award giving ceremony expresses an evaluation of the project. It says:

Faced with an imposing architectural work of extraordinary power, clarity of form and beauty, the jury could not help but question the compatibility of Sher-e-Banglanagar with the needs and aspirations, of a poor country. Yet review of the building's design and construction plans on site studies reveal that over time it has come to enjoy overwhelming approval, it stands as a symbol of democracy in Bangladesh and has influenced that country in a variety of beneficial ways. Reaching beyond the architecture of the immediate area, the building has assimilated important archetypes of the region among other ways through the extension of its parks and water pools. The architect has re-interpreted and transformed these ideas through a process that applied concepts of construction technology to conditions specific to the Dhaka locale. The result is a building that while universal in its source of forms, aesthetics and technologies could be in no other place. [Meer Mobashsher Ali and Md Abdur Rouf]