Jessore Zila School is one of the oldest schools of the greater jessore district. It was established on 3 February 1838 and named Jessore Zila School in 1872. Though the school was established under a government order, it was founded originally with donations from local people. On 27 January 1845, the wife of the zamindar of Naldi Pargana made an annual grant of Tk 300 for running the school. The school received financial and other help from persons like Babu Ramratan, Nilkamal Pal Chowdhury, Raja Barodakanta Roy, Darakanath Thakur, Kunjalal Thakur, Moulavi Abdulllah, Mohammad Karim, Pranonath Chowdhury, Shukh Das Roy, Radhamohan Gosh Chowdhury and Kalikanta Poddar. 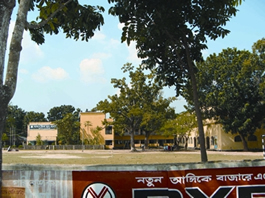 The school was launched with 132 students in the Bungalow of Rani Kattayani of Naldi. Later, the school acquired 7.80 acres of land in the Kharki-Jessore mouza and was shifted there after building new houses there. The school introduced teaching of Persian language in 1874 and of Urdu after 1947. Urdu was also the medium of instructions for non-Bengali students of the school. The Pakistan government undertook the development of the school under a pilot project in 1963. That year a new stream of science group alongside the existing humanities group was introduced. The commerce group was introduced in 1965 and Fine Arts in 1970. The school has common rooms, a science laboratory and a library.

Mr. J Smith, the first headmaster, worked from 1838 to 1848 in the first term and then from 1851 to 1865 in another term. Notable among the teachers of the school are Dr muhammad shahidullah, krishna chandra majumder, and Anis Siddiqui. Its eminent alumni include Zillur Rahman Siddiqui, Serajuddin Hossain, Professor Mohammad Moniruzzaman, and Comrade abdul haque.

The school has nine buildings including a two-storied students' hostel, an administrative building, and residential quarters for the employees. It also has a mosque, an auditorium, a health centre, a playground, and two ponds. [Amjad Hossain]